Report on the situation at Manolada | June 2020

Report on the situation at Manolada | June 2020

This report comes after that of March 2020, in which we had aimed to record the conditions for land workers due to COVID-19. At that time, due to the inability of our organization to move to Manolada, the information was recorded by telephone contact with local authorities, official bodies and land workers. On June 15, after the end of the restriction measures due to the pandemic, our organization visited again the land workers’ camps and held meetings with the Mayor of Andravida-Kyllinis and the Commander of the Varda Police Department, as part of a follow-up to the monitoring of the information we had previously collected by telephone from the local authorities.

There are no official records about the exact population of land workers. According to the municipal authority, the number of land workers currently living in Manolada ranges from 5,000 to 6,500 , while according to the police it is estimated about 7,000 men. The vast majority are from Bangladesh, with very few land workers of Pakistani and Egyptian descent.

Most of the land workers have no legal documents. According to the police’s estimation, only 1/10 of them have received a certificate of “postponement of expulsion due to employment in the agricultural economy” (based on article 13A of Law 4251/2014), while some of the immigrants have obtained a residence permit for humanitarian reasons due to the fire incident in 2018. Specifically, a total of 336 such permits have been issued to date, as stated by the police.

In addition, on the day of our visit, a delegation from the Embassy of Bangladesh was also present at the area. As we were informed by the community of land workers, its purpose was to receive applications for the issuance of new passports. This need arises due to the large number of land workers in the area and their inability to move massively to the Embassy.

The living conditions in the two camps that we visited, remain particularly difficult and dangerous for the health of the land workers. In the first one, the situation remains the same as usual, with makeshift huts made of bamboo, steel and greenhouse plastic films. In each of those huts 10 to 20 people live together, paying a monthly fee of 15-20 euros per person. Furthermore, there is no water supply, apart from some small plastic tanks, as well as there is no provision for sanitary protection, i.e. there is no waste collection and no sewage cleaning of the makeshift toilets inside the camp.

In the other camp, which was created after the 2018 fire, there are now 14 substandard lodges, made of plywood, which have been inhabited for the last 4 months by land workers. As we were informed by the migrants there, around 8 people live in each house for which they pay the sum of 220 euros per month.

According to what the land workers told us, the strawberries were harvested as usual. Nevertheless, during the period between March and the first days of May, the work was reduced because of the restrictive measures of COVID-19, while in some cases strawberries were harvested only to be thrown away, due to the difficulty of exporting to other countries because of COVID-19. Since May, after the end of the COVID-19 lockdown, the work in the fields has returned back to normal.

Finally, there is evidence that the workers are stacked in small trucks by their employers, in order to be transported to the fields, while there have also been complaints that they are not provided with sufficient water and food supplies during their work. 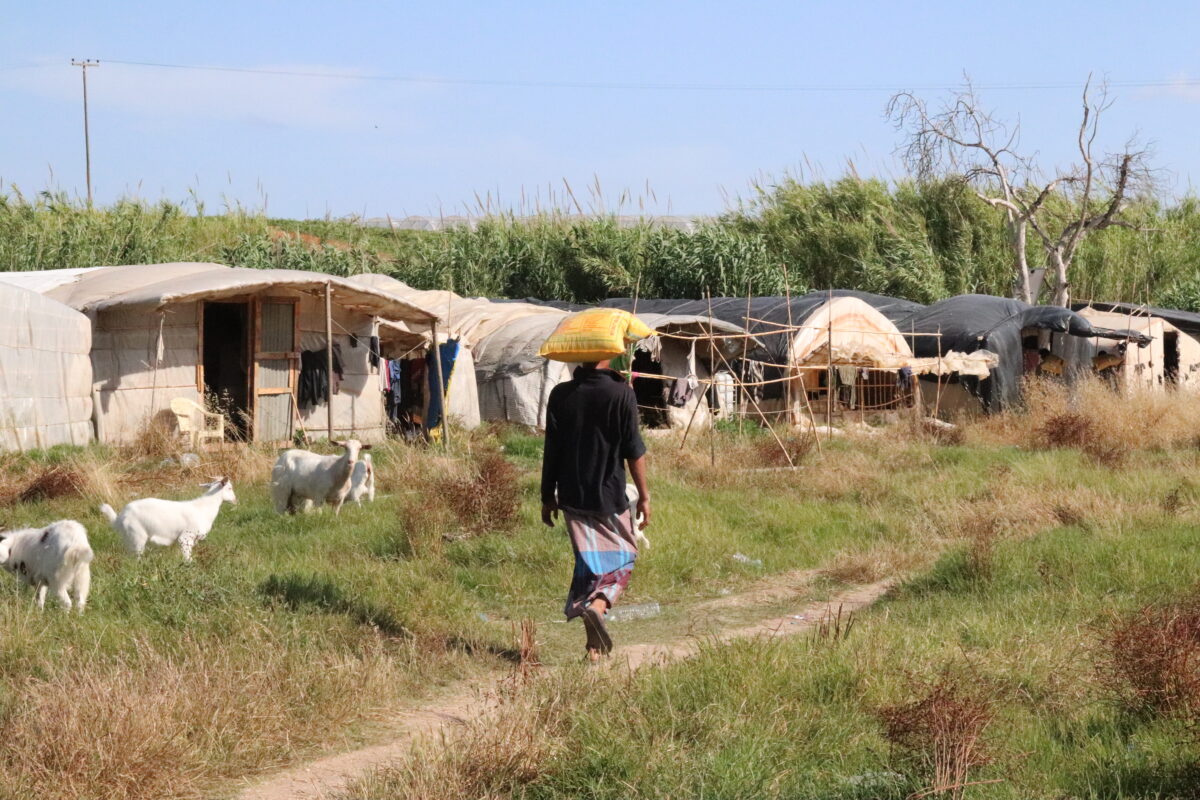 The camp with the makeshift huts made of bamboo, steel and greenhouse plastic films | Photo by Generation 2.0 RED 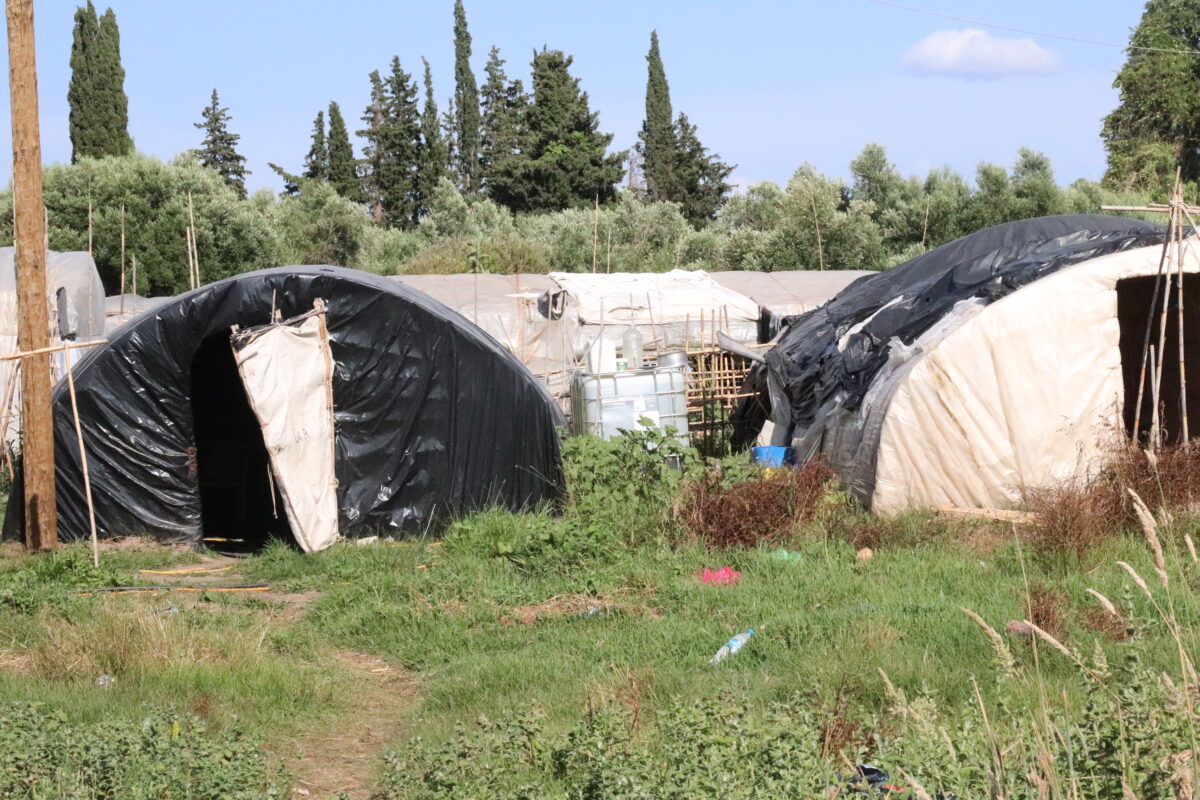 A small plastic water tank, under the sun, between the huts | Photo by Generation 2.0 RED 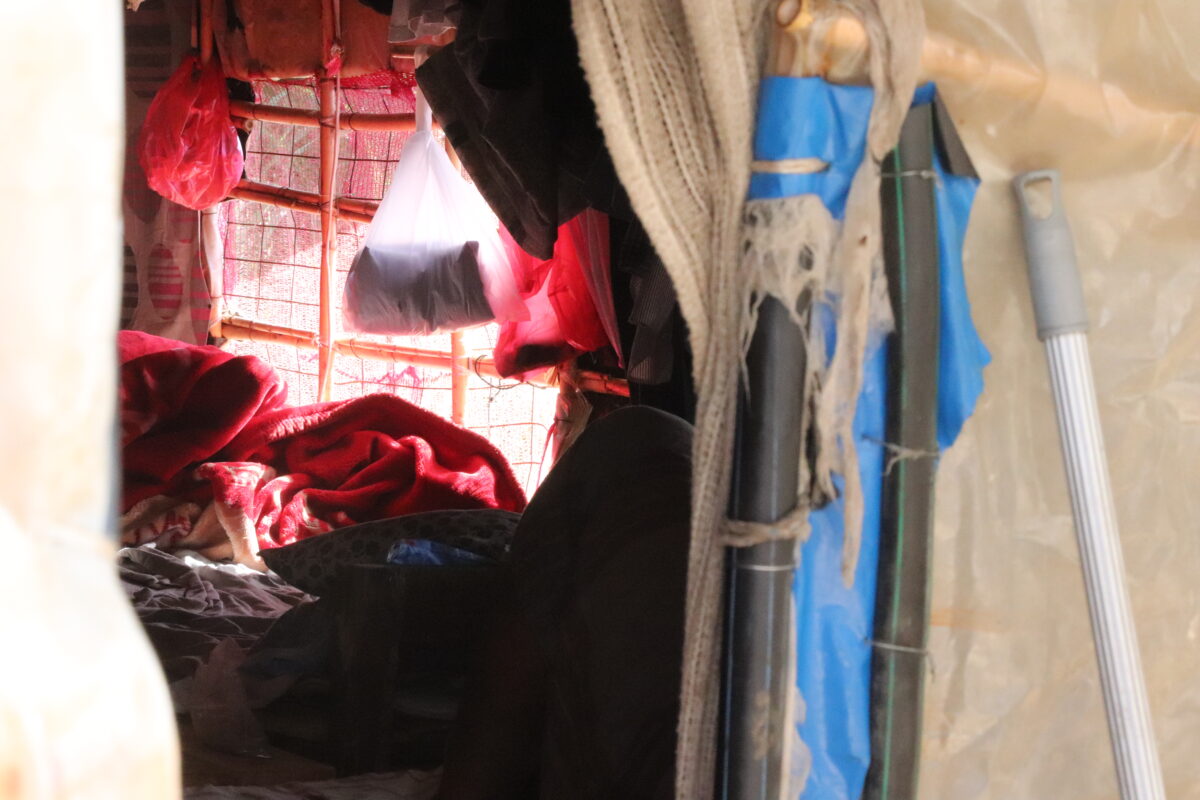 The interior of one hut | Photo by Generation 2.0 RED 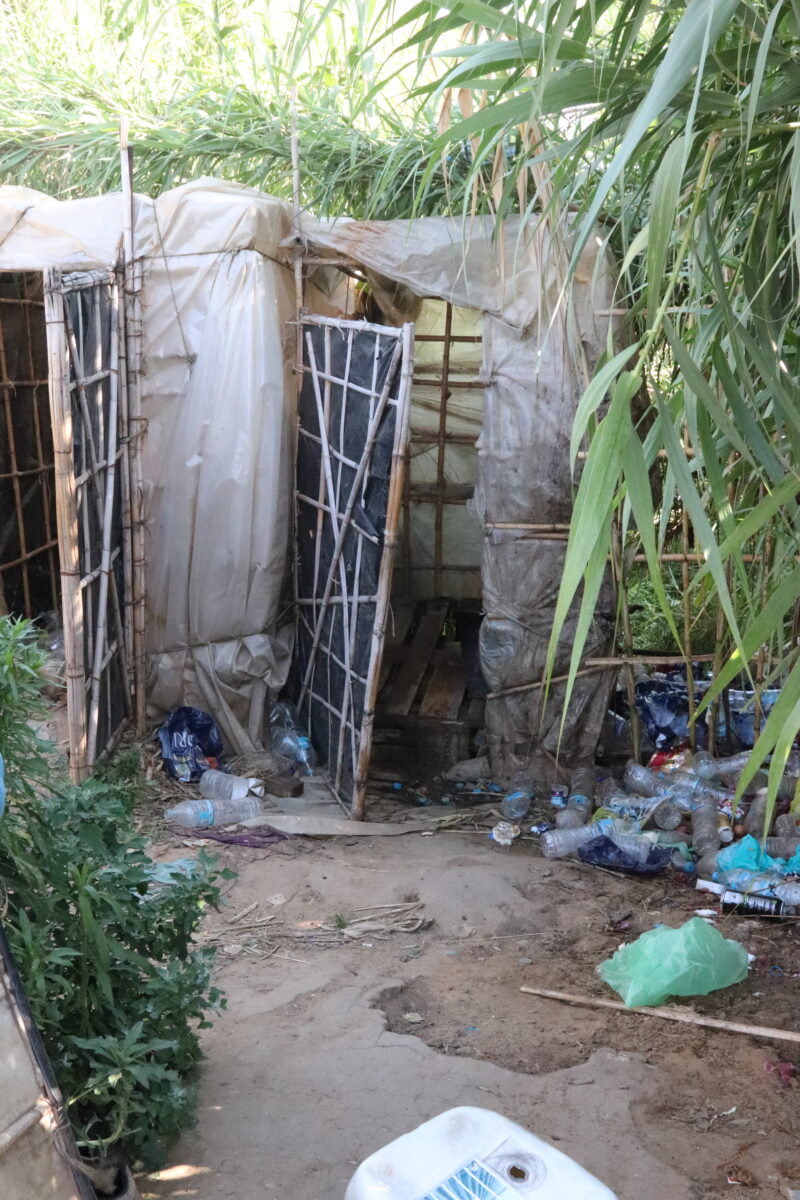 Garbage in front of makeshift toilets and showers | Photo by Generation 2.0 RED 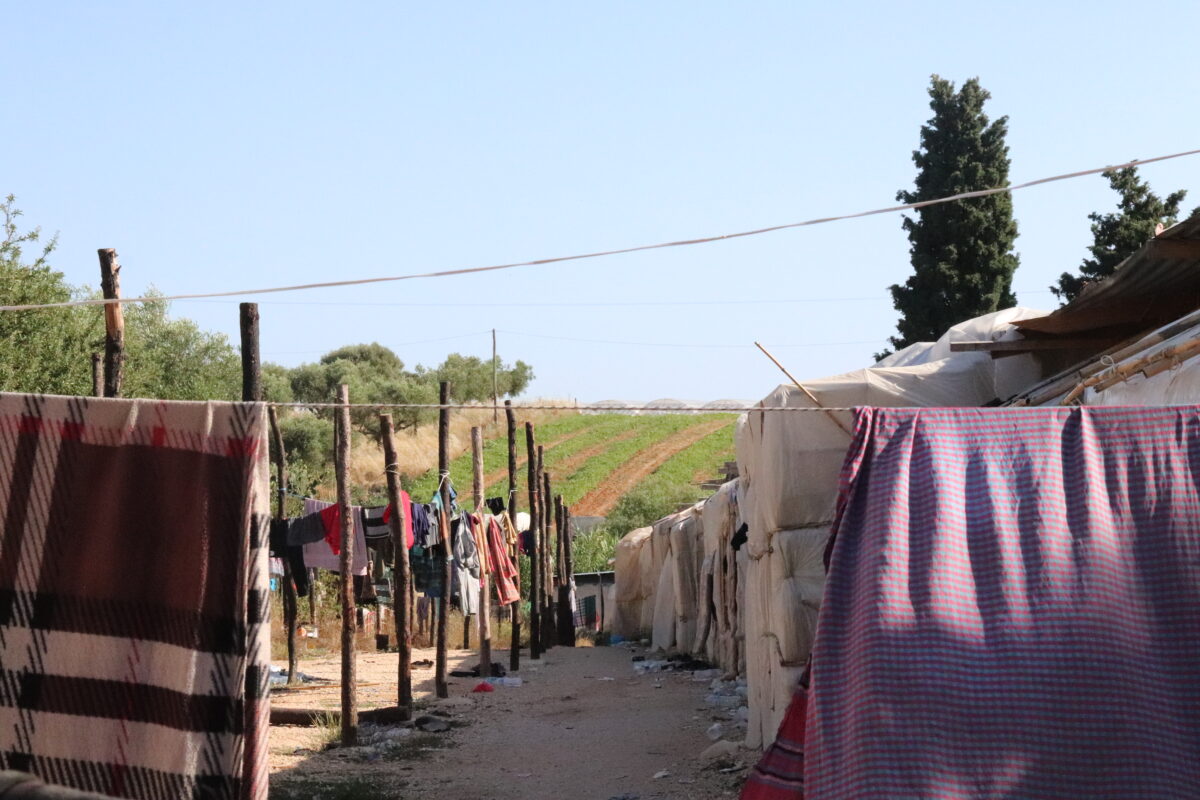 The new lodges recently in the camp created after the 2018 fire | Photo by Generation 2.0 RED 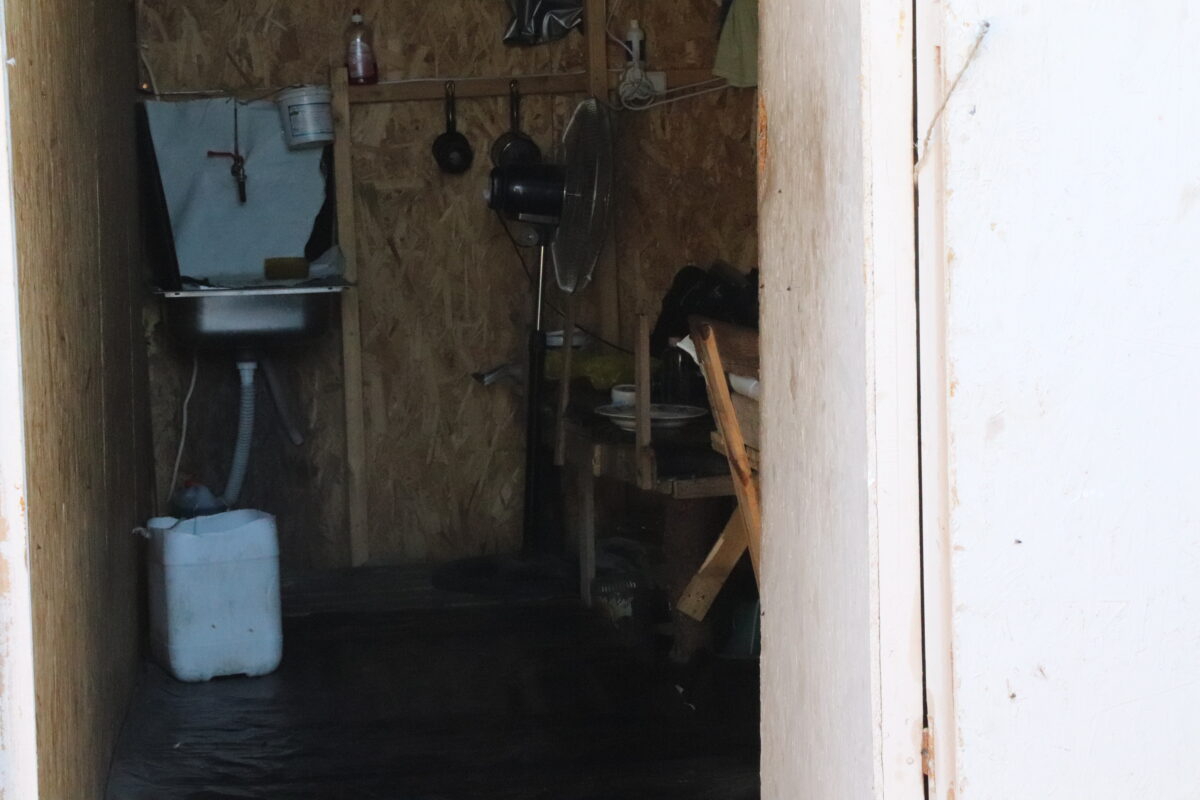 The interior of a new lodge, made of plywood | Photo by Generation 2.0 RED

Here you can find March’s report