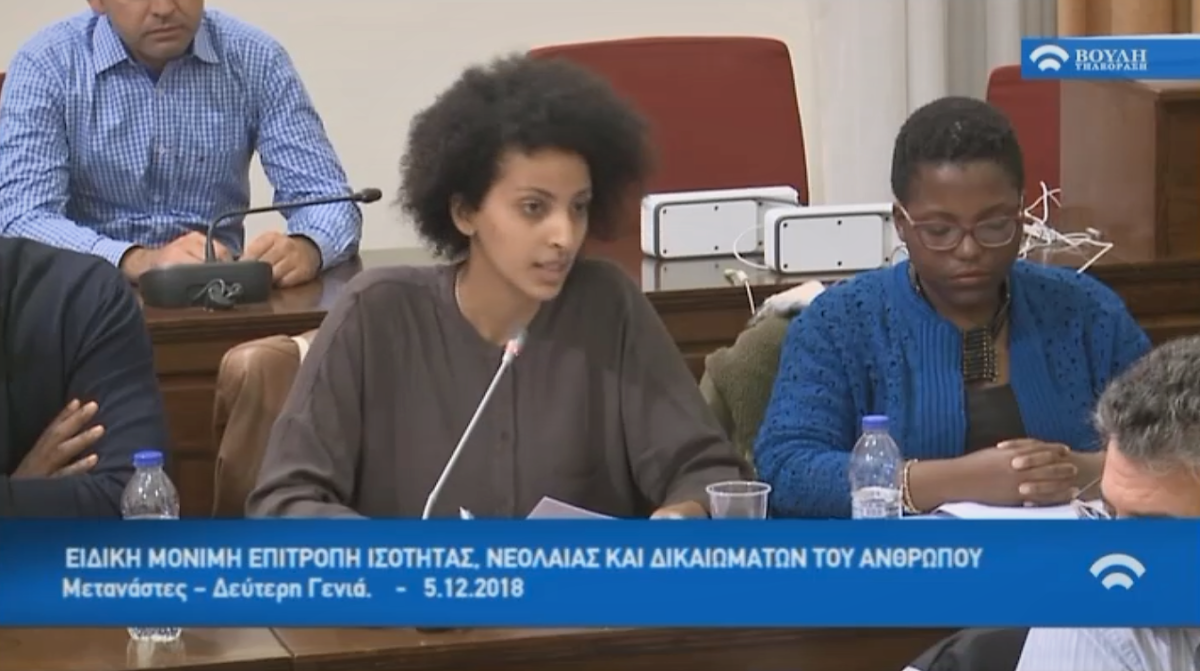 On Wednesday 5/12, Generation 2.0 for Rights, Equality & Diversity participated in the meeting of the Permanent Special Committee on Equality, Youth and Human Rights on “Migrants – Second Generation”.

Below you can read our entire speech.
You can watch the video with the whole speech on Facebook or on YouTube.

Generation 2.0 for Rights, Equality and Diversity, is an organization of people of migrant and Greek background, who work together to promote equal participation in a diverse society, particularly through the empowerment of communities.
As an organization created by the so-called second generation of migrants, we have as our primary goal to advocate for the rights of socially vulnerable groups. As is known, in our 12-year history to date, we have carried out campaigns that have led to the right to Greek citizenship for the second generation, as well as a host of other activities and events that promote human rights, diversity and equal participation in Greek society.

A notable indicator of our initiatives is the recent creation of the Representative Council for Research and Documentation (ASET) which is made up of representatives of migrant communities and experts with experience and expertise in the field of human rights-based advocacy. The creation of the council marks the recognition of the need for a collective effort towards advocating for fundamental rights as well as for effectively responding to today’s challenges in immigration and integration.

As the new generation of Greek citizens, today we will address the issues that affect the immigrant family as a whole, that is, the first as well as the second generation each in different ways. We want to look at whether the policies that are being implemented are in line with the logic behind integration as well as to reflect on how we understand integration. Immigrants do not only work. They create a family here, they get sick, and now they are also going into retirement. We wonder, are the current policy making processes taking into account these existential dimensions of the presence of immigrants in this country?

My colleague will now list the arising issues that make us wonder”.

Delays in immigration and citizenship services

A cross-cutting issue in both immigration and citizenship regardless of the category one is in, (whether first/second generation) is the service delays in processing requests and applications. To clarify, particularly regarding residence permits, we are observing a reel back to a previous era where third country nationals faced with services incapable of providing adequate service, lived in a precarious situation of permanent temporality. It is no secret that these delays as well as those in the citizenship services are a direct result of understaffing. Staff exchanges have left these services depopulated (for example, the Immigration Directorate of Piraeus which over the course of 4 years has seen employee numbers go down to 30 from the 60 it originally had). Of course, pro-immigration policy would not be to limit the right to employee mobility. Pro-immigration policies would be a minimum threshold of employees which allow a service to function as well as incentives towards employees so that they do not leave the services.

There are of course cases where understaffing does not justify the extent of delays. We are referring of course to the extreme delays with citizenship applications of the second generation in Thessaloniki. In this Directorate, based on the answer to a parliamentary question posed last year, it seems that despite unprecedented delays in processing applications, it has the highest number of employees in the country, both in absolute and relative terms. This is of course a well-known fact as we have raised this issue along with the Hellenic League for Human Rights directly to the Ministry of Interior, and a relevant parliamentary question has been directed to the same Ministry. In fact, just yesterday statistics were published by the Ministry of Interior which show the relative delay in this area compared with other regions of Greece . We know that, faced with these examples, a centralization of services under the Ministry of the Interior is underway. Do the politics behind the concentration of the services under the Ministry of Interior guarantee an improvement of the situation?

With article 38 of Law 4546/2018 certain residence permit fees were amended based on the decision of the European Commission. Specifically, fees were reduced in some categories (a move that we consider as positive), raised in some others  and in some cases, fees were added. However, these changes have also led to specific imbalances in the fees, resulting in certain groups of immigrants or persons with immigrant backgrounds facing serious problems in maintaining their legal status in the country.

First and foremost, a sufficiently vulnerable group of people affected are pensioners who as financially independent persons are now asked to pay a 1000€ fee. This amount however does not correspond with the reality of a group that is receiving a reduced pension. Quite simply this group will not be able to cope with maintaining their legal residence. Subsequently, with the reduction of some fees, the retention of the €300 fee for the second-generation residence permit means that children of migrants born and/or raised in the country now pay more than their parents to ensure their legal status in the country.

A striking example is as well the €100 fee for the re-issuing of a residence permit due to passport renewal. The renewal of a passport is an inevitable process for which an immigrant is not responsible, therefore they should not be “punished” via a fee.

As mentioned earlier, migrants are not only workers but also retire and become pensioners. According to the legislation in force (Law 4387/2016), migrants as well as Greek citizens are required to prove that they have lived permanently in Greece for the past 40 years. Otherwise, their pension reduces at a rate of 1/40 for every year that is missing. As is known though, majority of immigrants have legal residence since 1998. Thus, they can only prove half of the years resulting in a reduction by half of an already low national pension even if they possess the 4500 insurance stamps required. This poses the following questions, “is it equal treatment to pose the same requirements for people with different histories?” Is it logical to require persons to prove legal residence from a period in which there was no legal framework to legalize them?”

In connection with this, we propose an adjustment of the required supporting documents so that those who have the minimum required 4500 insurance stamps have access to the minimum pension.

As is known and based on the preconditions of the Organization of Welfare Benefits and Social Solidarity, disability allowance is only granted to immigrants who have the residence permit for humanitarian reasons. This naturally leads to situations where even long-term residents (holders of ten-year residence permit or second-generation) with disabilities are deprived of this allowance. In some instances, this affects cases of children with disabilities who are deprived of the allowance because their parents do not have this specific residence permit (and how could they possibly have it?). We therefore propose to extend the right to this disability benefit to people who are entitled to with the only requirement being a holder of a residence permit in Greece.

All the above and much more related to the dignified living of immigrants and the second generation are issues of social cohesion and are directly related to the acquisition of citizenship and all that comes with it.  We need people to seek citizenship because they want to actively participate and not just because it is the only refuge to enjoy ones full rights.

It is an existential question for the Greek state.

It is also existential to ensure equal access to the rights of Greek citizens who are naturalized and for the migrant background to not be an obstacle which they will face in their lives (for example in appointment in the public sector, in retirement or even insurance as we had seen in the past).

We are at the disposal of the relevant bodies to talk in more detail and to present our relevant proposals.