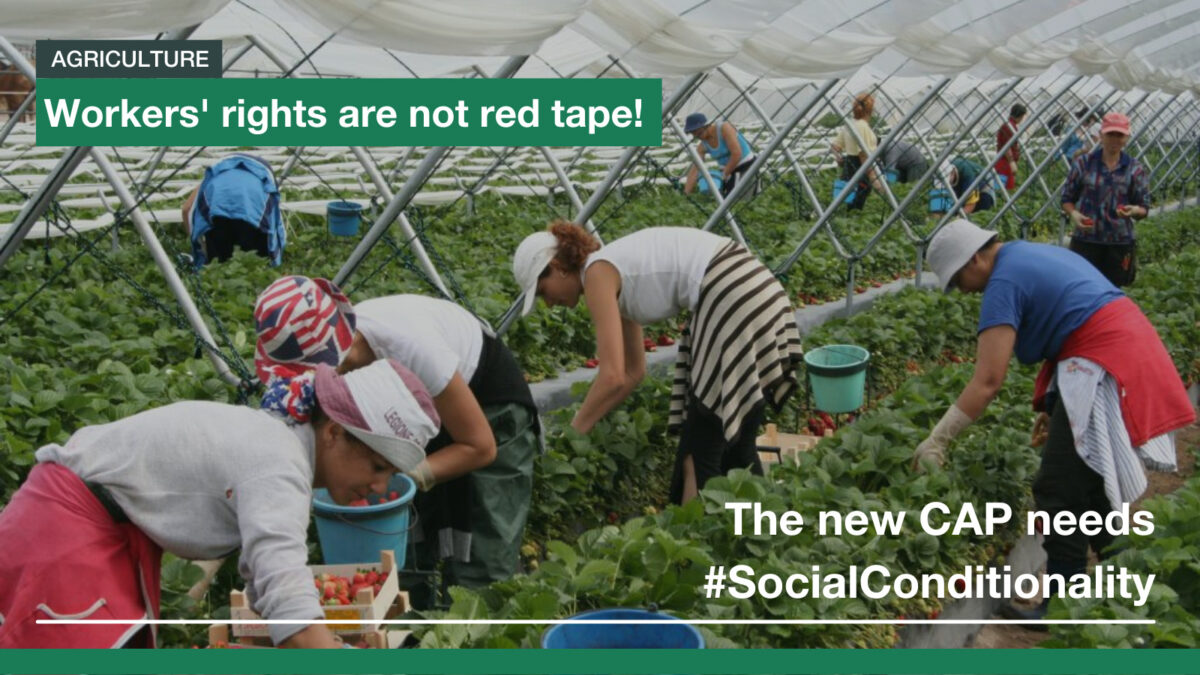 At least ten million people are employed in European agriculture, mainly as seasonal workers, day labourers or in other insecure statuses. Despite being defined as essential by the EU institutions and national governments when COVID-19 hit, the lived experience of many of
these workers remains one of struggle, deprivation and violations of human rights. Inhuman working conditions, poor wages, long working hours, a high proportion of undeclared work and sub-standard housing are only some of the daily hardships faced by farm workers in Europe. Workers often fall prey to widespread exploitation, including gangmaster practices and other forms of modern slavery.

Although their plight remains largely invisible, farm workers, be they EU nationals or non-EU citizens, migrants or refugees, working in North, South, West or East Europe, are united in demanding rights, social justice, and dignity at work.

Astonishingly enough, workers have never featured in the Common Agriculture Policy (CAP) – a flagship EU policy, now accounting for about one third of the EU budget (from highs of up to 73%). While CAP subsidies are now rightly conditional on respect for basic environmental standards, public health and animal welfare, compliance with human and labour rights plays absolutely no role in the allocation of direct payments. This is why, unsurprisingly, the CAP has thus far largely failed to improve agricultural workers’ conditions.

A concrete and easily applicable solution, however, is in sight. The European Parliament has adopted a clear position: CAP direct payments must be conditional on respect for the applicable working and employment conditions under relevant collective agreements,
national and EU law as well as ILO conventions.

However, this is only a first step in the right direction.

Negotiations between the EU institutions on the new CAP are ongoing and it is now crucial that social conditionality becomes part of the final agreement between the European Commission, the European Parliament and the Council of the EU. The position of the European Parliament should be confirmed and further strengthened. The case to be made is not just ethical – this is the only way to avoid social dumping, ensuring that the CAP can protect all those farmers who do respect workers’ rights, but suffer unfair competition from those that do not. And with social conditionality, a relevant part of the EU budget – funded by EU taxpayers – will finally contribute to improving working and living conditions in one of the most challenging and precarious sectors of the EU economy.

The COVID-19 pandemic presents the EU with a unique opportunity – overhauling European agriculture to make it truly sustainable and socially just. The CAP must contribute to this objective, meeting ambitious environmental goals while upholding respect for agricultural
workers’ rights, which can never be considered red tape.

We, the undersigned signatories, call on your sense of responsibility as legislators and EU citizens. Agricultural workers endure burning heat and freezing cold, injuries, aches and threats, survive on a few hours of sleep and quick, frugal meals, live in shacks or containers,
yet demonstrate astounding dedication to their jobs. It is thanks to them that, even in a global pandemic, there is food on our tables.

Agricultural workers now expect a clear response from the EU.