Based on data provided to us by the Ministry of Interior, it appears that from the beginning of the implementation of Law 4332/2015, 5.8380 applications for Greek citizenship have been filed by persons born and educated in Greece, 42.5% of whose applications have been filed in the Decentralized Services of Attica. Meanwhile, 27.858 decisions have been issued (about 48%). 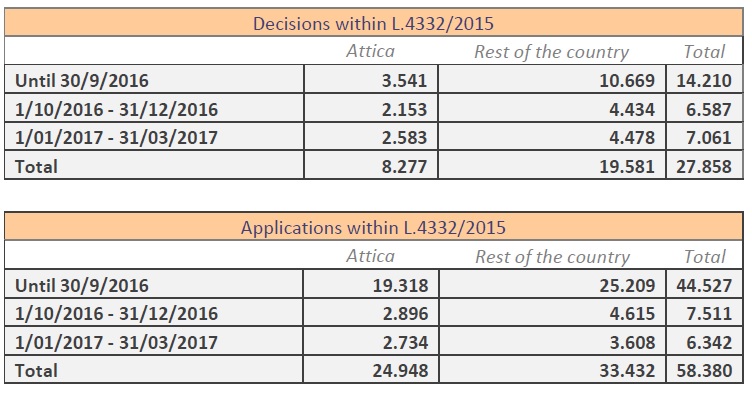 Apart from the procedure for migrant offsprings, there is also the procedure for acquiring Greek citizenship for legally residing third-country nationals (but also for people of migrant origins who do not meet the requirements of law 4332/2015), known as naturalization. We see that the examination of applications for naturalization does not tally with the aforementioned ones, as the decision numbers for the first quarter of 2017 are much lower, especially in services outside Attica. This happens even though, according to the national data of the Ministry of Interior for the last 6 years, naturalization for foreign nationals has more than tripled since 2011.

What raises concerns is that from the first figures of 2017, it appears that applications made in the first quarter of 2017 were more than twice higher than the decisions, while there are 24.213 pending applications, half of which are concentrated in Attica.

However, according to the Government Gazette B-1451/28/04/2017, additional Naturalization Committees are about to be set up in each Regional Unit.

These Committees will consist of:

Generation 2.0 RED welcomes  this move by the Government as it is more than evident that Greece needs to close the chapter of citizenship by strengthening the services, particularly those in Attica. Although, we expect to see how long this new committee will take to be set up this time, given the difficulties of appointing so many members. Do not forget that any delay or negligence to support the services keeps in limbo people who have paid a respectable amount to gain citizenship in a country where they have invested money, time and the future of their children.