Report on the situation at Manolada | September 2022

Report on the situation at Manolada | September 2022

Manolada Watch is an initiative of the organization Generation 2.0 for Rights, Equality & Diversity for the monitoring of working and living conditions of the migrant agricultural workers in Manolada in Ilia, Greece. Since 2017, as an organization, we have been dealing with the situation in the region, which has resulted in us collecting a lot of data and relevant experience. We decided to share this experience with the public, in order to contribute to the awareness of the Greek society and the public authorities for the case of Manolada.

This report follows the organization’s visit to Manolada on September 29, 2022 , during which we visited the area as long as the camps and talked to migrant land workers. Furthermore, we had a meeting with the Varda’s Police Station Commander and contacted the Migrant Integration Center (Greek Abbreviation: KEM) of Andravida-Kyllini, in order to get informed and updated on the current situation.

In the current period, where the demand for labor in the strawberry fields is diminished, the Police Department estimates that approximately 2.000-2.500 people reside in the area, whereas land workers reported that there are 4.000 people, mainly from Bangladesh. According to the latter, the number of people living in the area is too high for this period of time, because of the fact that they avoid moving to other rural areas of the country to work on other kinds of cultivation, as they are afraid of the possibility of them getting arrested and detained due to the their lack of documentation.

The vast majority of land workers still remain undocumented. As stated by the Police Department, since the beginning of 2022 only 140 people received a certificate of “postponement of expulsion due to employment in the agricultural economy”. This provision, which was based on the former article 13A of Law 4251/2014, was abolished from July 1, 2022, but retrieved for 6 more months by the article 62 of Ν. 4950/2022. Certainly, not even the Police Department was informed about this extension and it has yet to be implemented in the region. Besides, the application for employment in the rural economy by undocumented migrants must be done through an online platform of the Ministry of Migration and Asylum, which operated for the first time recently and not only does it malfunction but it is also insufficient when being used.

At the same time, the implementation of the Memorandum of Understanding between Greece and Bangladesh is expected, which was signed on 9 February 2022 and entered into force on 22 July with Law 4959/2022, which includes provisions on access to work permits for Bangladeshi workers in Greece. In particular, 15,000 citizens from Bangladesh , who currently reside in Greece without documents, as well as up to 4,000 people who will come from Bangladesh per year, will be given the opportunity to join the seasonal work permit regime. When applying for such a residence permit, a certificate or an employment contract must be submitted by the employer. The residence permit will last 5 years and the workers will have to stay 9 months per year in the country and the remaining 3 will return to Bangladesh. This residence permit will not lead to permanent residence nor gives the right to subsequent access to citizenship. It would also not allow family reunification nor a change of status to another residence permit after its expiry. Since the ratification of the bilateral Agreement in the summer, the necessary administrative acts have not yet been adopted in order for it to be implemented.

The information that the land workers of Manolada have about the conditions for the new residence permit is fragmentary and comes mainly from social media networks. Indicatively, they informed us that they had received a live broadcast on Facebook from their Embassy in which they were informed about some key elements of this residence permit.

Living conditions do not show any improvement. The makeshift shacks made of reeds, irons and greenhouse plastic films, remain in the camp, which we regularly visit. As the land workers informed us, when it rains a lot, water enters the shacks. Around 100 people currently reside in the camp. Per shack there are 10 people and they pay a monthly rent of 25-30 euros per person. During the high growing season this rent is increased to 35-40 euros. These sums are collected and given to the landowner. A water supply that existed at the border between the camp’s plot and the villages’ residences is closed and a large amount of money is requested from the resident land workers in order to reopen it. Water is supplied through small plastic tanks. A huge quantity of waste continues to be gathered while there is no provision for the collection and the removal from the camp. The toilets are makeshift with the result that the sewage stagnates there. The entire camp is run by ditches with stagnant water and sewage, making the health risk immediate, while the presence of insects and rodents is strong.

Next to the site of the other camp, which burned completely on June 27, 2021, a few makeshift lodgings have been built. There currently reside 7 people and added to them another 4-5 during the high growing season. As the resident land workers informed us, they do not pay any rent, as these accommodations belong to their employer. There is also water supply there, which costs them a total of about 250 euros per year.

According to the police, there have been joint visits with the health service to camps and some owners have improved the run-off of the sewage . Finally, according to testimonies of citizens of Bangladesh living in the wider area, within the village of Manolada, few lodgings have been made available to land workers by specific producers, but they only host 20 to 30 people in total.

During this period the labour needs of strawberry crops are reduced and mainly concern the preparation of fields before planting. Land workers usually work 7 hours on days requested by their employers. As the land workers informed us, for example 5 people are usually selected one day and 5 different people the next, for the split of wages between them. The daily wage has now reached 30 euros instead of 27 and 24 euros, which ranged in March 2022 and 2021 respectively. This gradual increase may be due to the shortage of migrant land workers that has been observed over the last year.

Following the data mentioned in previous reports, according to the KEM, a total of 5  COVID-19 vaccination sessions were carried out so far in Nea Manolada during which, a total of approximately 1,000 land workers were vaccinated. Additionally, in August 2022, 150 more Temporary Numbers of Social Insurance (Greek Abbreviation: PAMKA) were issued by KEM, in order to continue the vaccination process, but the land workers concerned were absent from the area and have not yet received those numbers. Apart from the pandemic, as has been observed by KEM, the inability for land workers to grant Number of Social Insurance (Greek Abbreviation: AMKA), due to their irregular residence atus, has serious consequences in cases of serious illnesses, in which it is necessary to receive medication and care. To this end, KEM is in collaboration with the Pharmacy Association of Ilia region to provide medicines to the land workers in emergency cases.

Finally, since a long time there has been the provision for a Greek learning program (Greek lessons for adults) to be implemented by KEM, but this has not yet progressed.

The visit was carried out with the support of 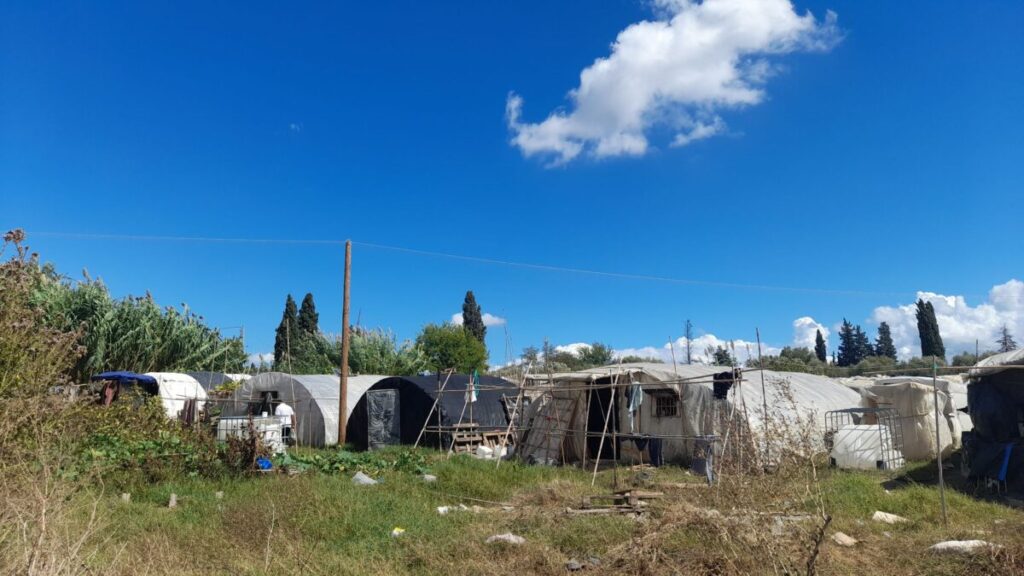 1st camp is located in the village ©Generation 2.0 RED 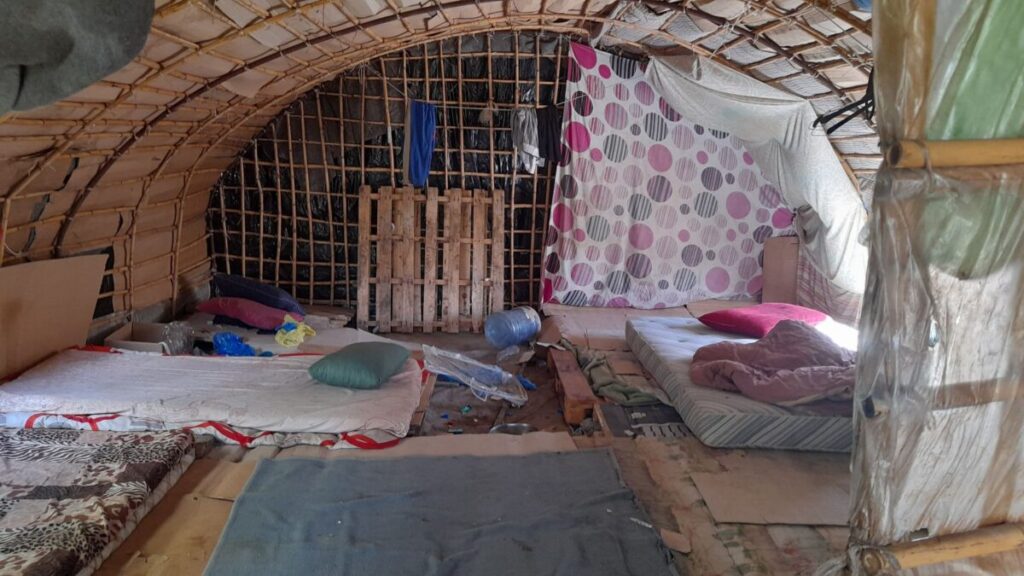 1st camp: the interior of a shack ©Generation 2.0 RED 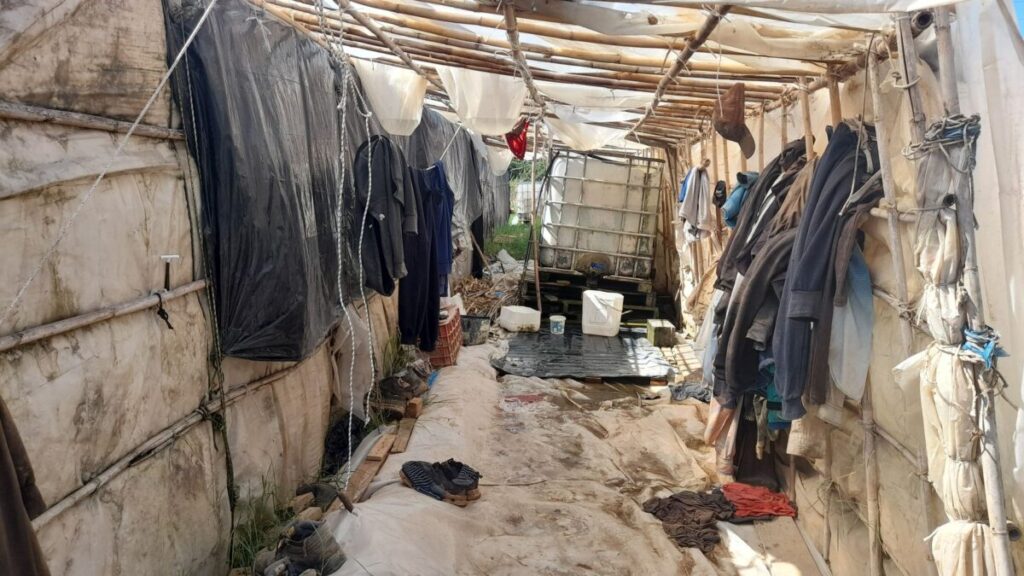 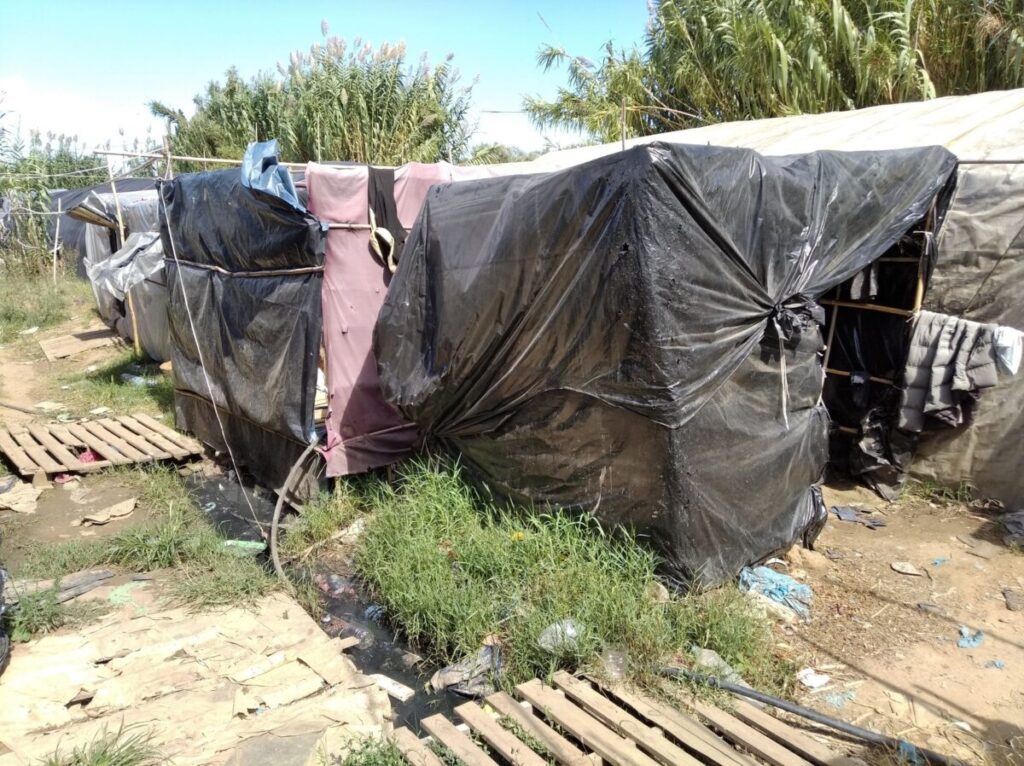 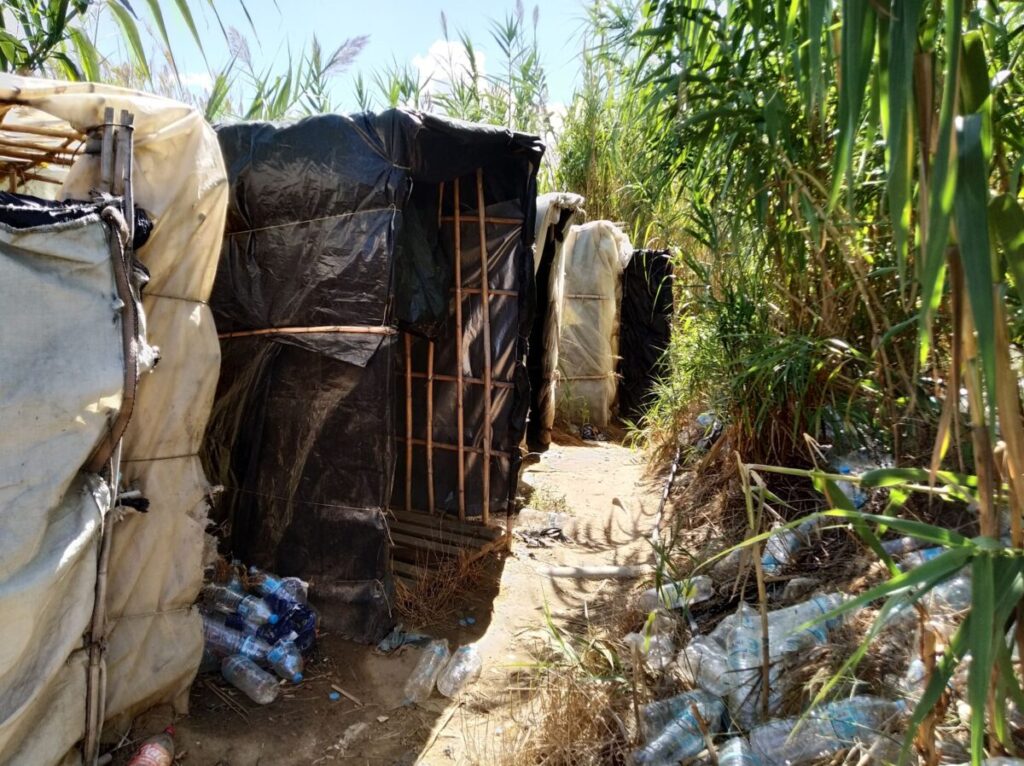 1st camp: makeshift toilets next to the stalls ©Generation 2.0 RED 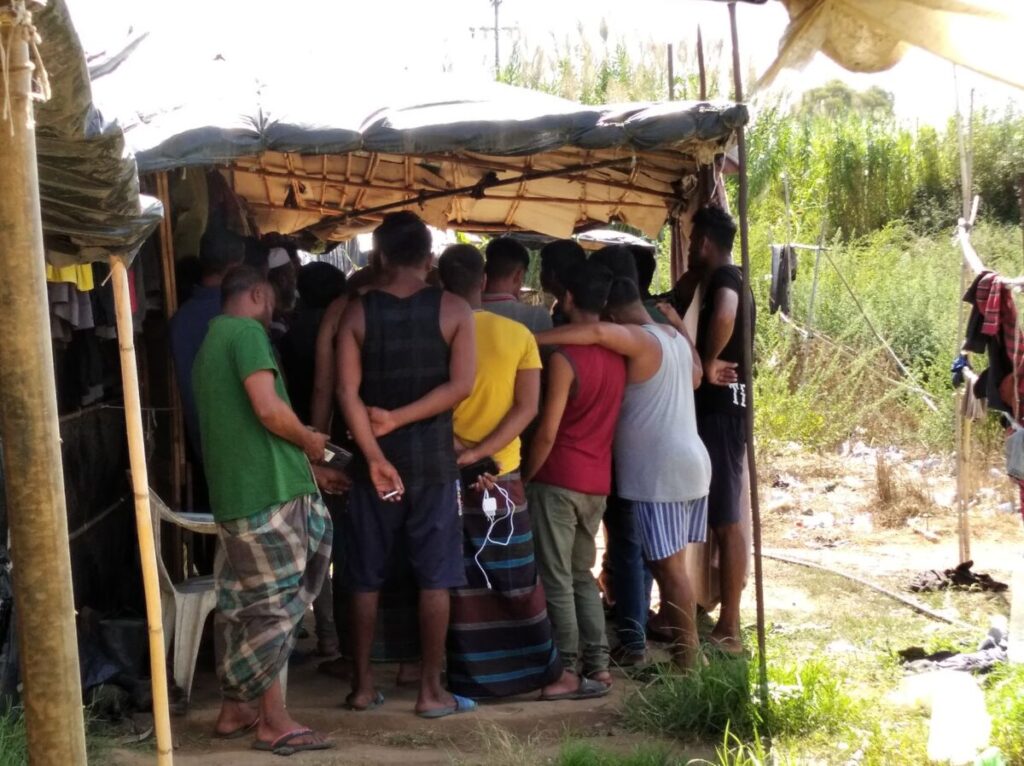 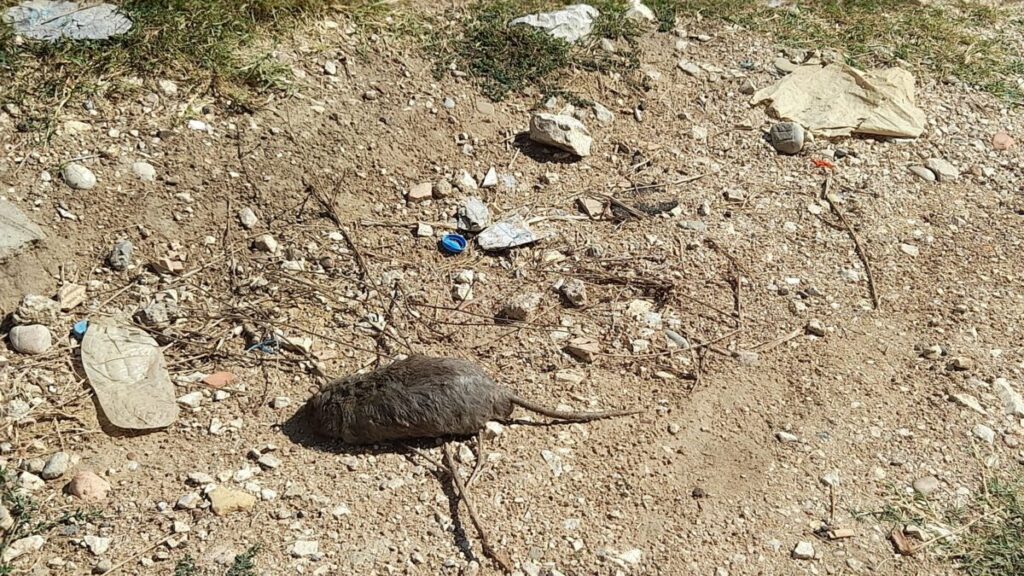 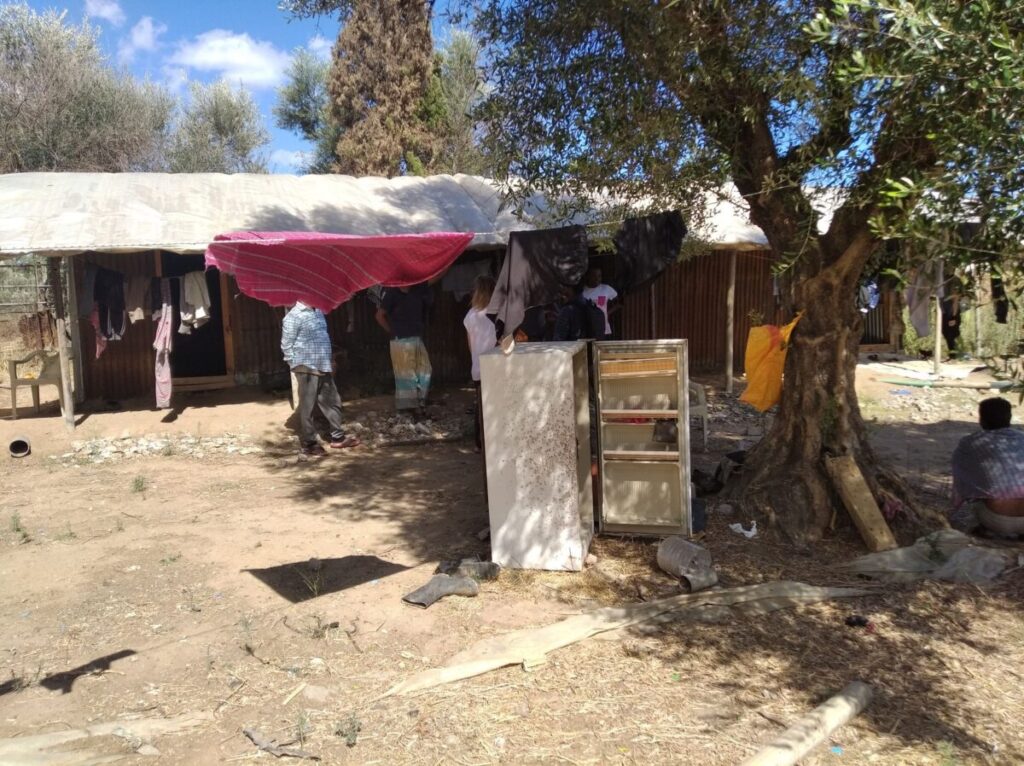 2nd camp is located near the ruins of the one that was burnt to the ground in June 2021 ©Generation 2.0 RED 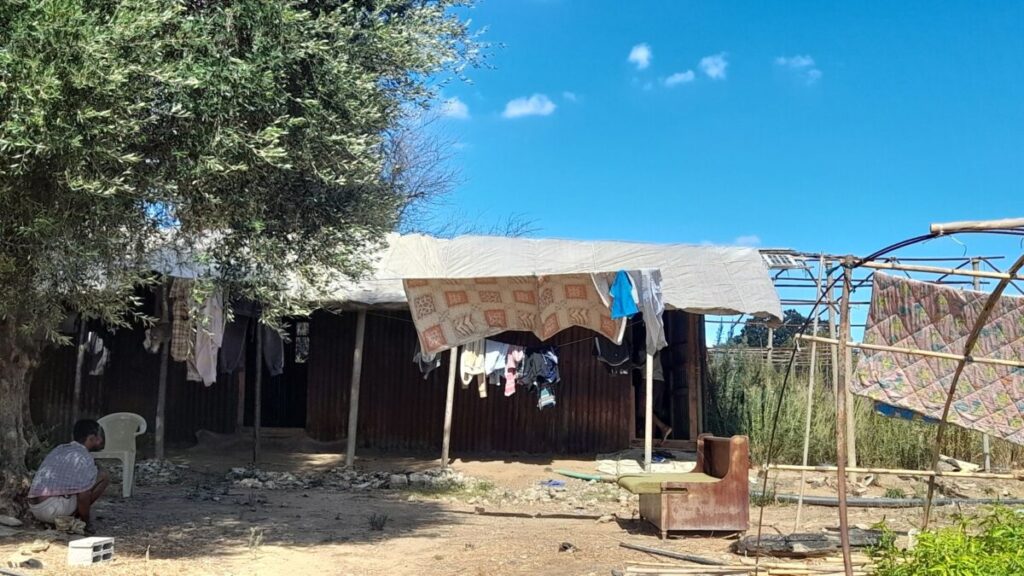 Here you can find the Report of March 2022