Report on the situation at Manolada | March 2022

Report on the situation at Manolada | March 2022

Manolada Watch is an initiative of the organization Generation 2.0 for Rights, Equality & Diversity for the monitoring of working and living conditions of the migrant agricultural workers in Manolada in Ilia, Greece. Since 2017, as an organization, we have been dealing with the situation in the region, which has resulted in us collecting a lot of data and relevant experience. We decided to share this experience with the public, in order to contribute to the awareness of the Greek society and the public authorities for the case of Manolada.

This report follows the organization’s visit to Manolada on March 3, 2022, during which we visited the region together with a delegation of the Council of Europe Group of Experts on Action against Trafficking in Human Beings (GRETA), along with Vassilis Kerasiotis, lawyer of the plaintiffs’ land workers in the Chowdury case, etc. v. Greece before the European Court of Human Rights, with whom we visited camps and talked to migrant land workers. The next day, we also had a phone call with an employee of the Migrant Integration Center for information about the current period.

There is no official data and numbers of registered land workers. According to estimates by land workers, it is estimated that at a time when strawberry cultivation and harvesting are in full progress, 7,000-8,000 people live in the area, most of them from Bangladesh.

The vast majority of land workers remain undocumented. Less than 10% of land workers have received a certificate of “postponement of expulsion due to employment in the agricultural economy” (based on article 13A of Law 4251/2014). These are the last months that the specific provision is applied, as this possibility will be abolished from July 1, 2022, based on Law 4825/2021.

A Memorandum of Understanding was signed between Greece and Bangladesh on February 9, 2022 which includes provisions for the legal status of working citizens of Bangladesh in Greece. According to an announcement by the Ministry of Immigration and Asylum, 15,000 Bangladeshis currently living in Greece will be given the opportunity to join the seasonal work permit regime. In this case, they have to stay in the country for up to 9 months per year and they have to follow the procedures provided for this residence permit. This permit will not lead to permanent residence nor gives the right to subsequent access to citizenship. It also does not allow family reunification, in accordance with the provisions of European seasonal labor legislation. In the following period, when the relevant legislative provisions are expected to be adopted as well as the issuance of administrative acts, there will be a more complete picture of the new regime and how it is expected to be implemented. The land workers did not seem to be informed about these impending changes.

Living conditions do not show any improvement. The makeshift shacks made of reeds, irons and greenhouse plastic films, remain in the camp, which we regularly visit. Due to winter weather and rain, land workers pass through the mud to cross the camp and reach their lodgings. Also, due to the lack of water and electricity, after returning from the fields, they wash themselves with cold water, despite the low temperatures. As they informed us, up to 10-12 people live together in the big shacks and the rent for each is around 100 euros per month, while the smaller shacks can accommodate up to 6-8 people and the rent is around 50 euros. These sums are collected and given to the landowner. A huge quantity of waste continues to be gathered while there is no provision for the collection and the removal from the camp. Finally, the toilets are makeshift with the result that the sewage stagnates there.

The other camp, created after the big fire of 2018, burned completely on June 27, 2021. Today, some makeshift lodgings have been built near this burned area, which remains vacant. 6 people stay per lodging there and they pay 100 euros per month. During this visit, we also went to a third camp, located next to strawberry fields. It is a fairly large area consisting of both shacks and small constructions. There is also a prayer area in this camp, where at its entrance, COVID-19 protection instructions have been posted.

At this time, production is in full progress. Land workers usually work 7 hours a day in strawberry fields. According to their representatives, the wage has now been consolidated at 27 euros, instead of 24 euros that was valid in recent years (read more in the previous report of November 2021). According to what the land workers said, they move mainly with small trucks to and from the cultivated areas.

Vaccination of undocumented land workers began in October 2021 and continued during the current period. According to the Municipality of Andravida-Kyllini data, on January 10, 84 land workers were vaccinated and on February 15, another 150 at the Community Office of Nea Manolada. According to the representatives of the community of land workers, another 1000 people have been registered to be vaccinated. Their representatives are in contact with the Migrant Integration Center of the Municipality, where they have given their personal data. The Migration Integration Center, in consultation with the General Secretariat of Reception and Identification of Asylum Seekers, has undertaken the issuance of a Temporary Social Security Number (Greek abbreviation: [ΠΑΜΚΑ] PAMKA) for their vaccination. The land workers finally informed us that there have been no serious cases nor outbreaks of COVID-19 in their community during the recent months. 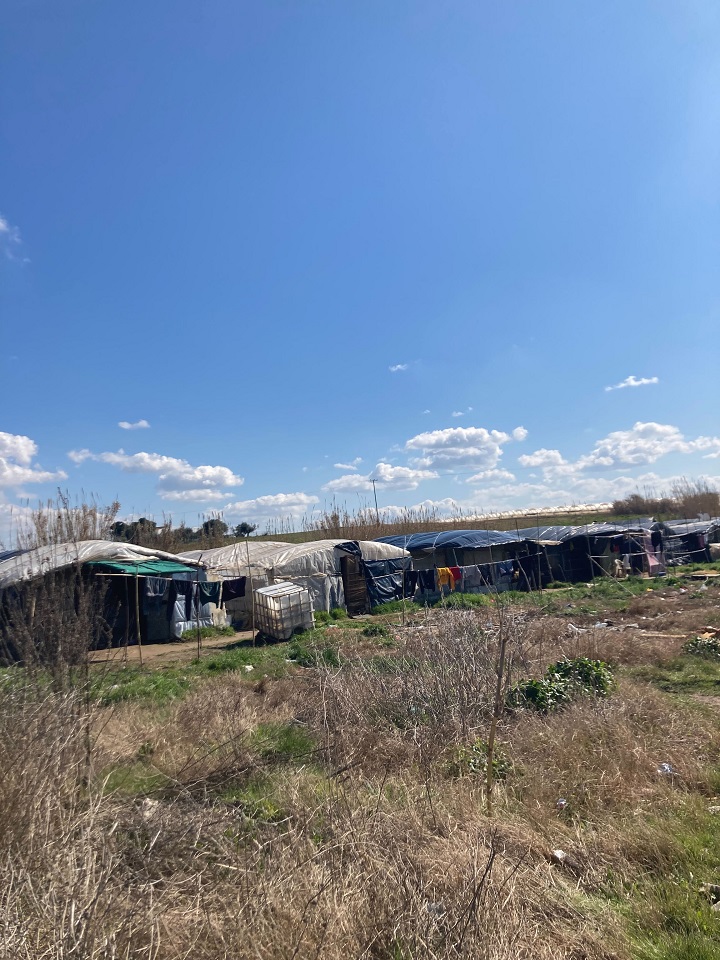 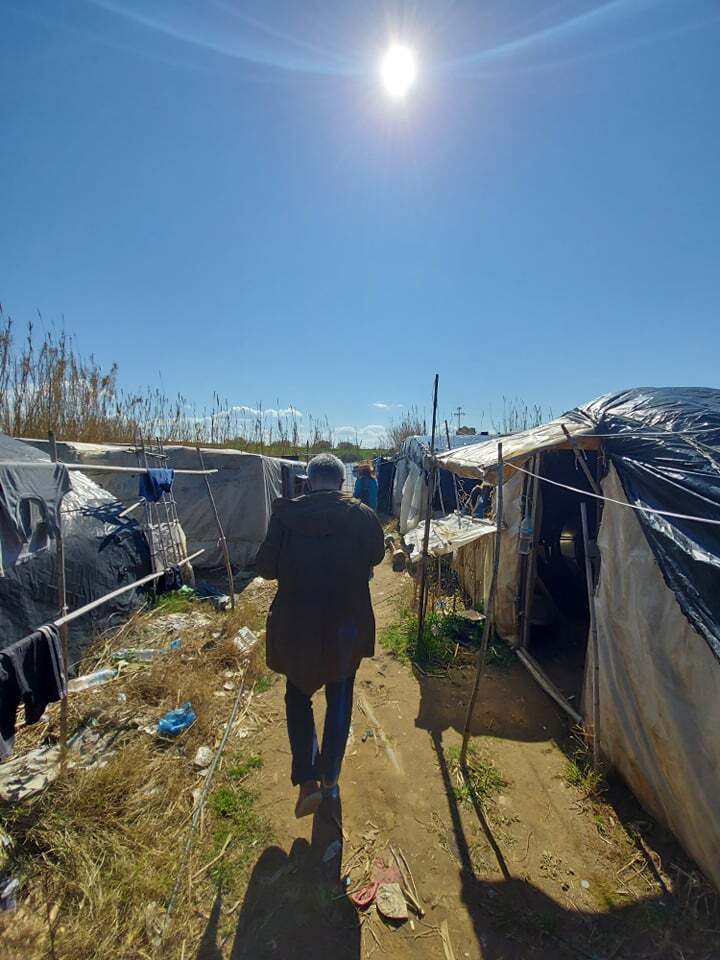 Passing among the shacks ©Generation 2.0 RED 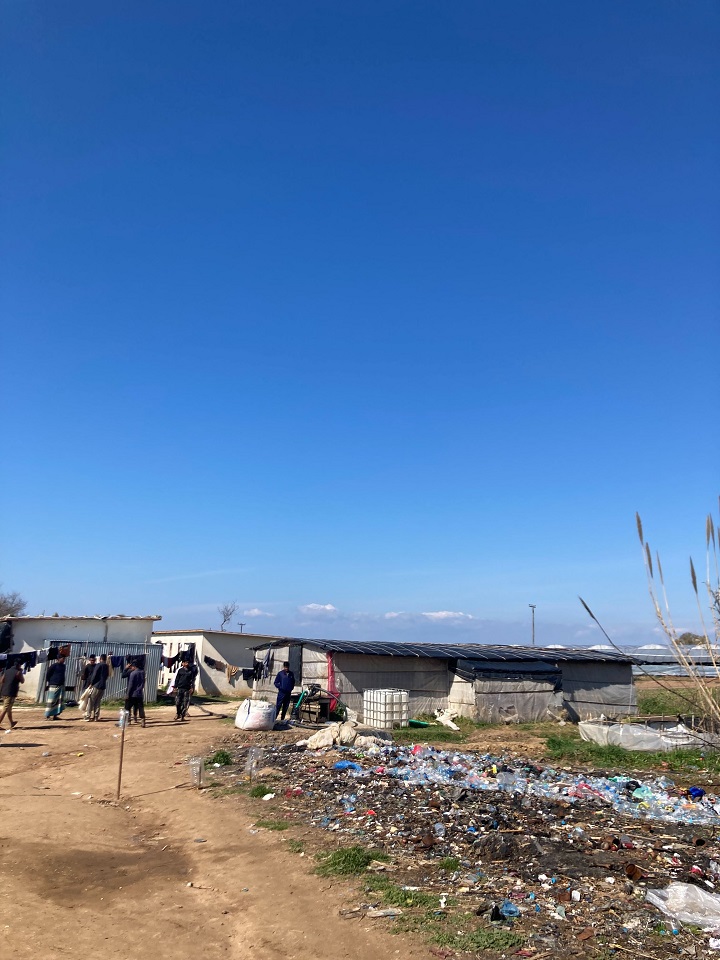 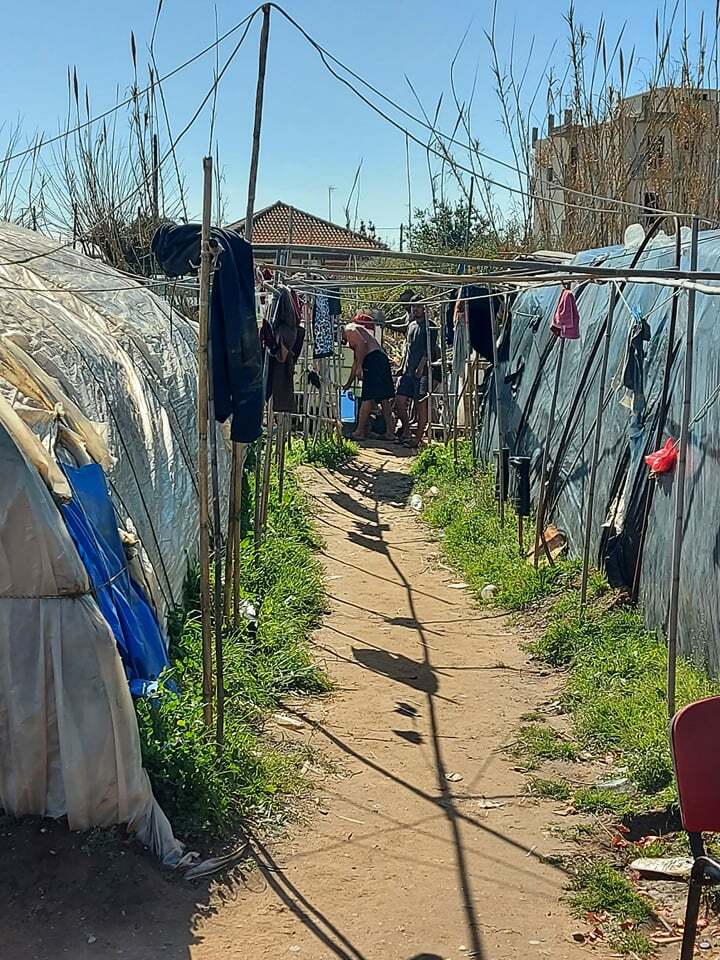 On the other side of the same camp ©Generation 2.0 RED

Here you can find November’s report.