Report on the situation at Manolada | November 2021

Report on the situation at Manolada | November 2021

Manolada Watch is an initiative of the organization Generation 2.0 for Rights, Equality & Diversity for the monitoring of working and living conditions of the migrant agricultural workers in Manolada in Ilia, Greece. Since 2017, as an organization, we have been dealing with the situation in the region, which has resulted in us collectinga lot of data and relevant experience. We decided to share this experience with the public, in order to contribute to the awareness of the Greek society and the public authorities for the case of Manolada.

This report follows the organization’s visit to Manolada on November 19, 2021, during which we went to camps and talked to migrant land workers, as well as we had meetings with the Commander of Barda Police Department, the employees of the Municipality Immigrant Integration Center and a phone contact with the Mayor of Andravida-Kyllini.

There is no official data and numbers of registered land workers. According to estimates by land workers and local authorities, due to reduced work needs, there are currently 1,500 people living in the area, most of them Bangladeshis. During the months when the cultivation and harvesting of strawberries is in full swing, the population of land workers exceeds 7,000.

In view of the population census process, the Immigrant Integration Center (greek abbreviation: KEM) of the Municipality of Andravida-Kyllini has made contacts with the Statistical Service of Ilia, so that land workers, who reside permanently there, can be counted, using any identification document (ID card, family status certificate, birth certificate from Bangladesh).

The vast majority of land workers remain without legal documents. According to the information of the Police, in the last year there has been a great reduction in the total number of certificates of “postponement of expulsion due to employment in the agricultural economy” (based on article 13A of Law 4251/2014). In particular, a total of about 200  certificates of postponement of expulsion have been issued, while last year, between 2019 and 2020, this number was around 700.

Living conditions show no improvement. In the camp, which we visit regularly, the makeshift huts made of bamboo, steel and greenhouse plastic films remain the same. Due to the coming winter, land workers have started laying extra layers of nylon over the huts. As they informed us, currently 6-8 people live together in a hut and pay each month rent to the owner of the area, of 30 euros per hut. In the upcoming months and until the summer, when the number of residents will increase due to the production of strawberries, the number per hut ranges from 10 to 20 people, while the rent rises to 40 euros per month. In the camp there is no water supply network but only small plastic tanks, which are placed between the huts. There is also a concentration of huge amounts of waste, which the land workers burn from time to time as there is no provision for their collection from the camp. Finally, the toilets are makeshift so any sewage that is collected remains stagnant.

The other camp, which was created after the big fire of 2018, burned completely on June 27, 2021 and has not been rebuilt to date. The space remains empty, as we had last seen it 2 days after the fire. The land workers who lived there either live in other camps or have left the area.

In recent years the wage has remained stable at 24 euros for 7 hours of work and 3.5 euros per hour of overtime. According to representatives of the community of Bangladeshi land workers and local authorities, the wage was recently increased to 27 euros and 4 euros per hour of overtime. Information on the wage increase is ambiguous. The above sources claim that the strawberry producers decided to increase the wage in order to ensure that they will have the necessary labor force that has started leaving for other areas where wage is better. At the same time, they claim that the community of land workers has started taking some actions in order to get organized and demand better working conditions. However, there were also testimonies of land workers who state that they continue to be paid 24-25 euros per day while they knew nothing about the organization of their community.

Finally, the land workers, according to their own testimonies, move to and from the fields either by truck or by car or on foot, which in some cases means that they walk for an hour to reach their destination.

The few land workers who have a residence permit and social insurance number (greek abbreviation: AMKA), have already completed their vaccination in the past. The issue remains for those who do not have legal documents and therefore no AMKA. The Municipality of Andravida-Kyllini in collaboration with the 6th Health District (greek abbreviation: YPE), brought a team of doctors to the Community Office of Nea Manolada on October 14, 2021, where 86 land workers were vaccinated with the first dose. According to the municipal authority, the vaccinations of the 2nd dose and the rest of the population are expected to continue in the immediate future, as soon as the Ministry of Foreign Affairs will have the necessary stock of vaccines and the land workers will also be able to have Temporary AMKA (greek abbreviation: PAMKA). According to a written instruction notified to KEM by the Ministry of Immigration and Asylum, the Center will now be able to issue PAMKA for land workers who wish to be vaccinated and receive a vaccination certificate. Representatives of the land workers’ community have compiled a list of documents and details of those wishing to be vaccinated in the upcoming period.

Regarding COVID-19 cases that have been detected among farm workers, KEM informed us that no outbreak has been observed, while in a case where a farm worker became ill with severe symptoms, the farm workers who lived with him, immediately informed others and he was taken to Pyrgos Hospital. When he recovered, he returned by ambulance, as there was no other means of transport available. KEM cooperated with the elected member of Nea Manolada, in order to monitor the progress of his health and gave instructions to his roommates in order to take care of him and to keep him safe. 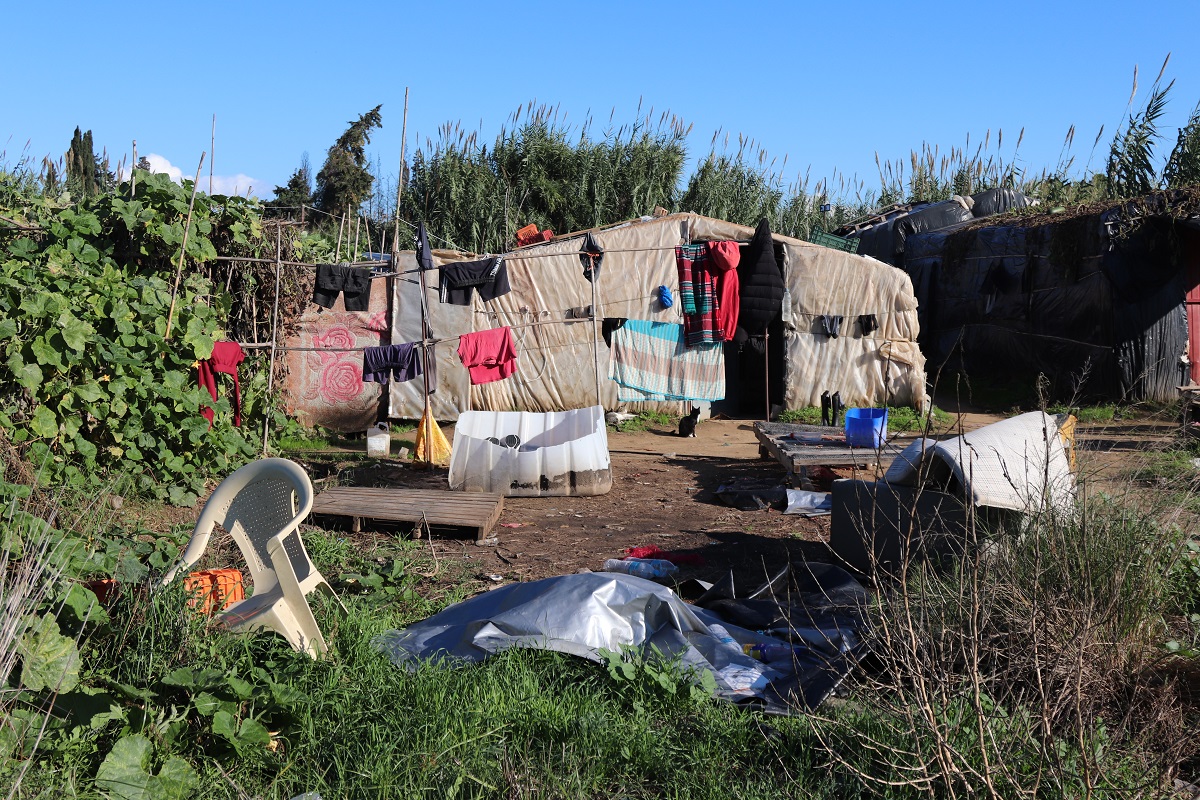 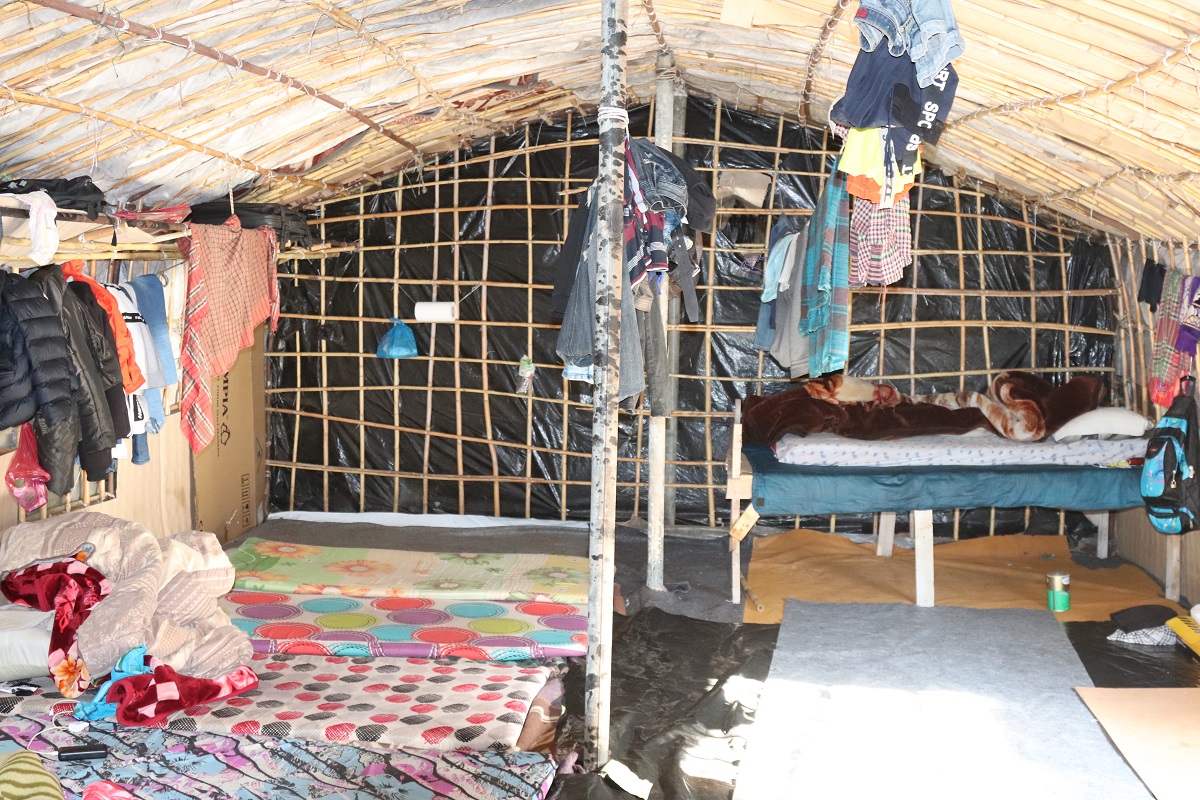 The interior of one of the huts ©Generation 2.0 RED 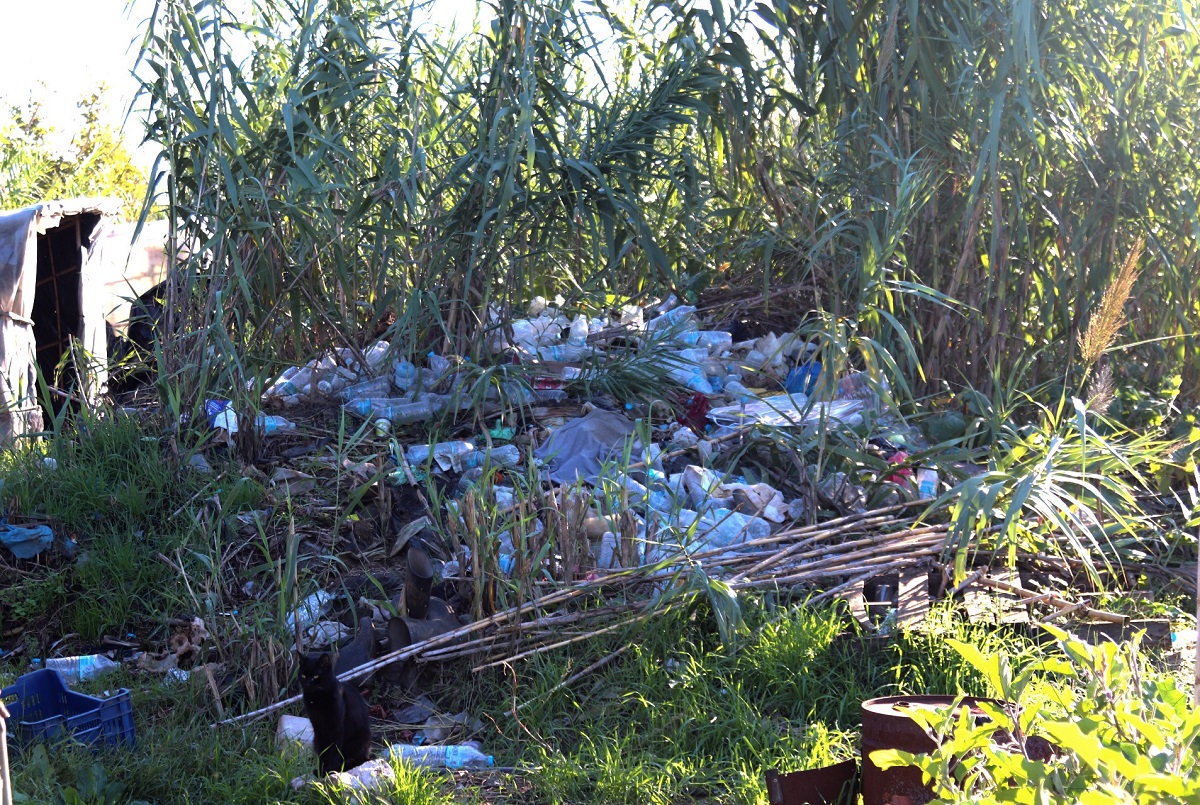 Mass of rubbish outside the huts of the camp ©Generation 2.0 RED 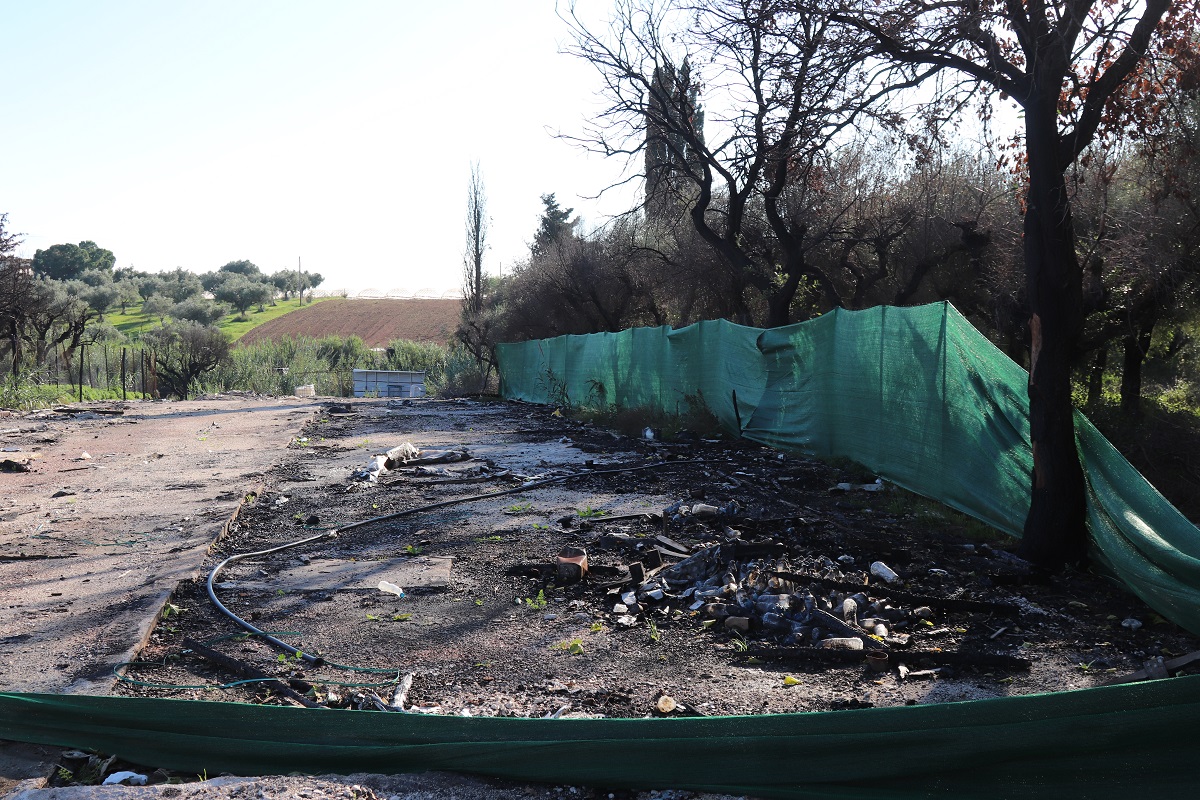 The site of the camp that was completely burnt down in June 2021 ©Generation 2.0 RED 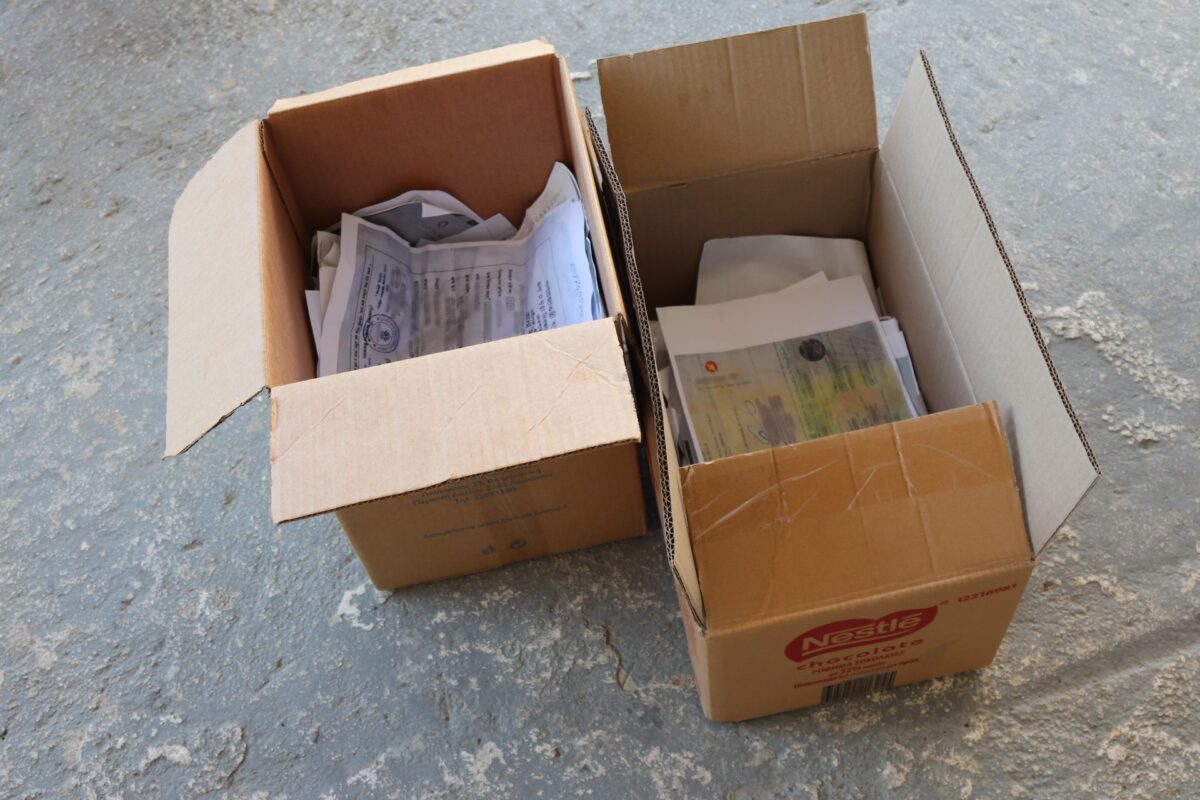 The documents of those who wish to be vaccinated ©Generation 2.0 RED

Here you can find June’sreport.