Report on the situation at Manolada | November 2022

Report on the situation at Manolada | November 2022

Manolada Watch is an initiative of the organization Generation 2.0 for Rights, Equality & Diversity for the monitoring of working and living conditions of the migrant agricultural workers in Manolada in Ilia, Greece.

Since 2017, as an organization, we have been dealing with the situation in the region, which has resulted in collecting a lot of data and relevant experience. We decided to share this experience with the public, in order to contribute to the awareness of the Greek society and the public authorities for the case of Manolada.

This report follows the organization’s visit to Manolada on November 23, 2022 , during which we had a meeting with the Mayor of Andravida-Kyllini, we visited one of the camps and talked to migrant land workers. Furthermore, we contacted the Migrant Integration Center (Greek Abbreviation: KEM) of Andravida-Kyllini and the attorney Vasilis Kerasiotis regarding the progress of the two relevant cases.

During the 2021 population census, according to the KEM of Andravida-Kyllini, the service managed to register 2,000 migrant land workers. Until then there was no official data for their population, but according to the estimates of the land workers themselves as well as the local authorities, it is estimated that during the high season of strawberry crop, the migrant land workers, mainly from Bangladesh and less from Pakistan were about 6,000-8,000, in earlier years.

The Municipality estimates that in the current period 2.500 land workers reside and work in the area. This number is actually very small compared to the labour needs of strawberry crops, given that ideally 5,000 people should be employed at the moment. The reduced number of workers, according to the Municipality, is mainly because many land workers earlier moved to Italy and Spain, where there were regularisation schemes in the agricultural sector. At the same time, as it is claimed by land workers, many of their compatriots are in other regions of Peloponnese or Greece, working in crops that pay higher wages, such as olives ones.

The vast majority of land workers still remain undocumented. The peculiar system of the certificate of “postponement of expulsion due to employment in the agricultural economy” for the undocumented migrants in the rural economy —known as article 13A of Law 4251/2014— was established in 2016. This provision was abolished from July 1, 2022, but retrieved by consecutive legislative provisions for a particular period of time on each occasion. Based on the latest amendment added at Law 4997/2022, it will be applicable until 30/06/2023. However, this is not a residence permit, since the only document given to undocumented land workers is the certificate of postponement of expulsion. This procedure was not widely implemented in previous years and the land workers, who had access to it, were finally very few. According to data collected by Varda’s Police Department presented in previous reports, there were about 700 postponements of expulsion per year and in 2022 only 140.

Furthermore, we should recall that after the large fire that broke out in one of the camps in summer of 2018, 355 people in total, 286 from Bangladesh and 69 from Pakistan, have been regularised through the residence permit for humanitarian reasons (for particularly abusive working conditions).

Finally, the implementation of the Memorandum of Understanding between Greece and Bangladesh –which was signed on 9 February 2022 and entered into force on 22 July by the Law 4959/2022– has already been delayed for several months. This Memorandum includes provisions for the residence status of Bangladeshi workers in Greece. In particular, 15,000 citizens from Bangladesh who currently reside in Greece without documents, as well as up to 4,000 people who will come from Bangladesh per year, will be given the opportunity to obtain a seasonal work permit. For further information you can read the relevant part from the September 2022 report.

The living conditions are recorded as particularly distressed and do not show any improvement.  The makeshift shacks made of reeds, irons and greenhouse plastic films, remain in the camp, which we regularly visit. Our September 2022 report describes in detail the situation there. At this period of time due to frequent rain and the winter weather the camp, which is located on soil, is overwhelmed by mud and water, making its passages difficult to access.

According to the Municipality, lately there have been some initiatives by producers that will construct lodgings with electricity and water to accommodate land workers.

Finally, on 30/11/2022 the Court of Amaliada, which examined the reasons behind the large fire which broke out in one of the camps in 2018, declared innocent the land workers, who were accused of negligent arson, causally linking its reasoning to the living conditions in Manolada.

During this period, the labour needs are increased, as the strawberry harvest has already begun for certain early varieties of strawberries. According to testimonies of land workers, the daily wage is now about 30 euros, after a recent increase firstly recorded in September 2022. In recent years, the daily wage had been established at 24 euros, while in March of 2022 the first increase was reported as the daily wage reached the amount of 27 euros. The consecutive increase made this year seems to be due to the lack of work force for strawberry crops.

At last, another trial following the 2018 fire, is pending, in which producers-employers are accused of undeclared work after the charges pressed by the former Special Secretary of the Labour Inspectorate. The trial date of 29 November 2022 was postponed and re-set for May 2023.

According to the information from the KEM, during the previous period, about 1,000 land workers were vaccinated against the COVID-19 pandemic without it being clear how many of them have been fully vaccinated or have received only one dose. Also, the Municipality informed us that it cooperates with the Medical Association of Ilia for the administration of vaccines against tuberculosis.

Finally, while the implementation of the Greek Language Program (Greek lessons to adults) by the KEM has been planned for some years, it has not yet begun, despite the provision of the necessary funds for its implementation. 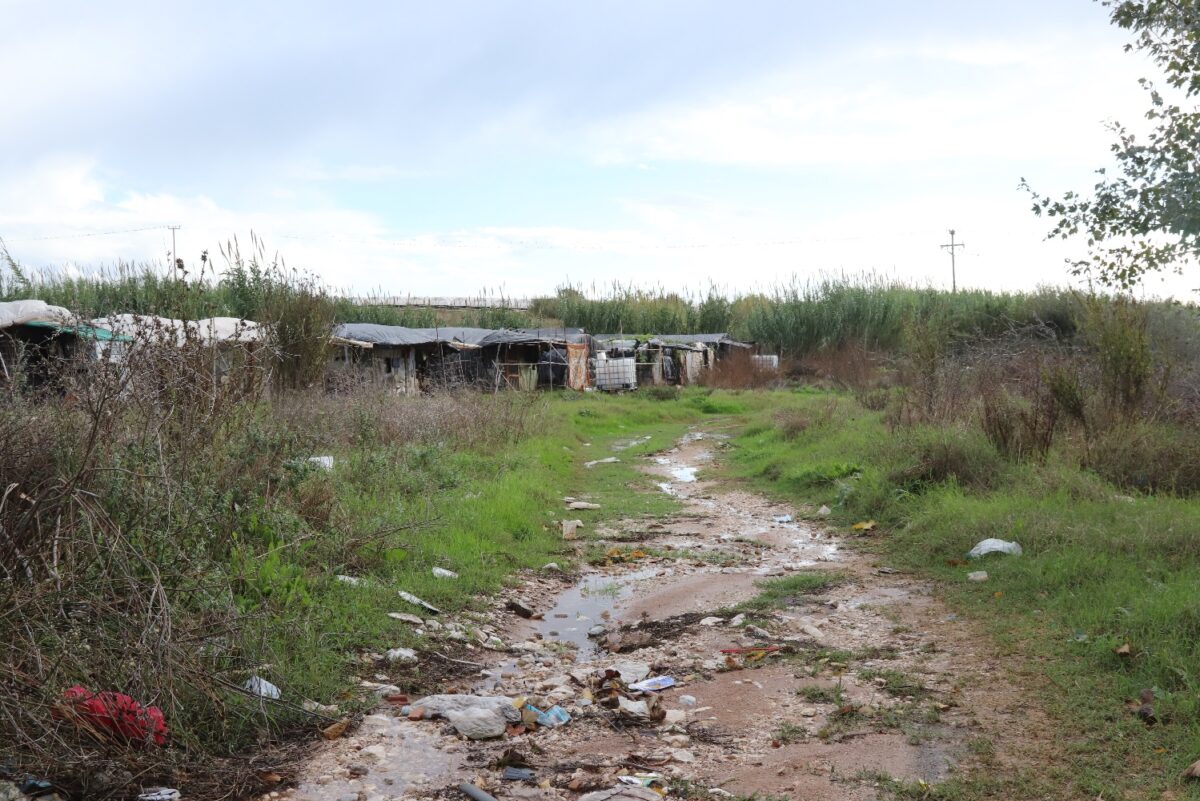 The camp located in the village ©Generation 2.0 RED 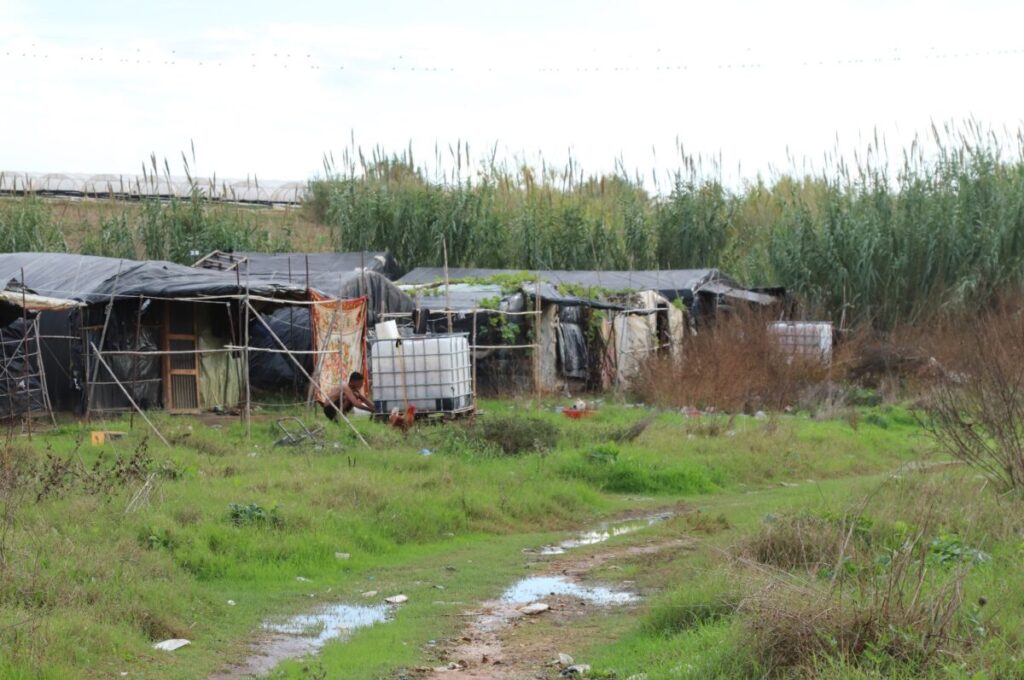 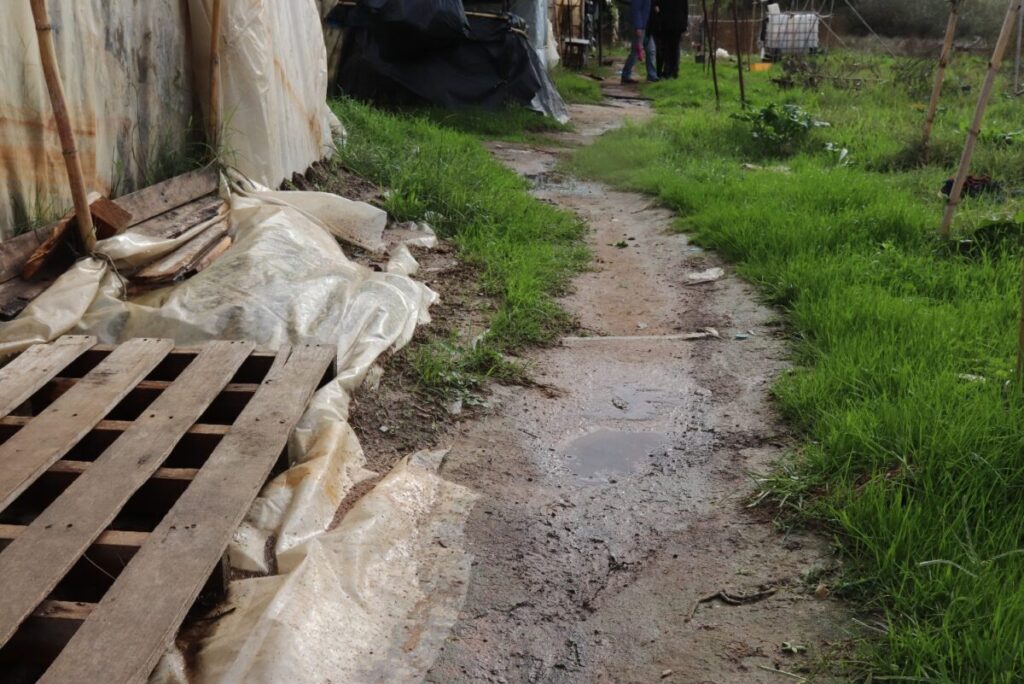 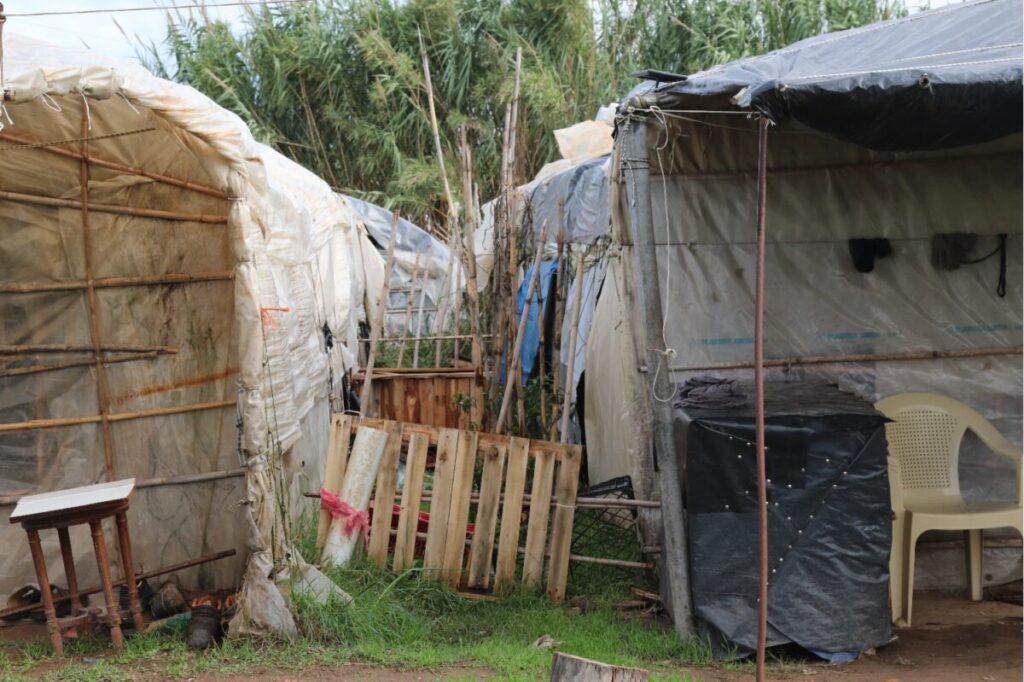 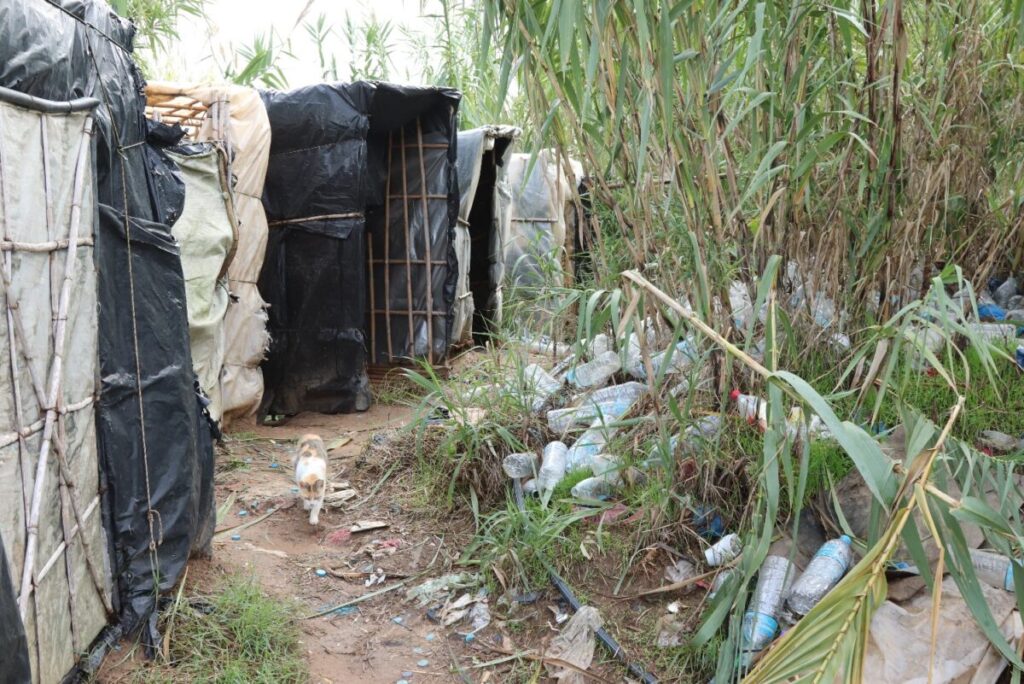 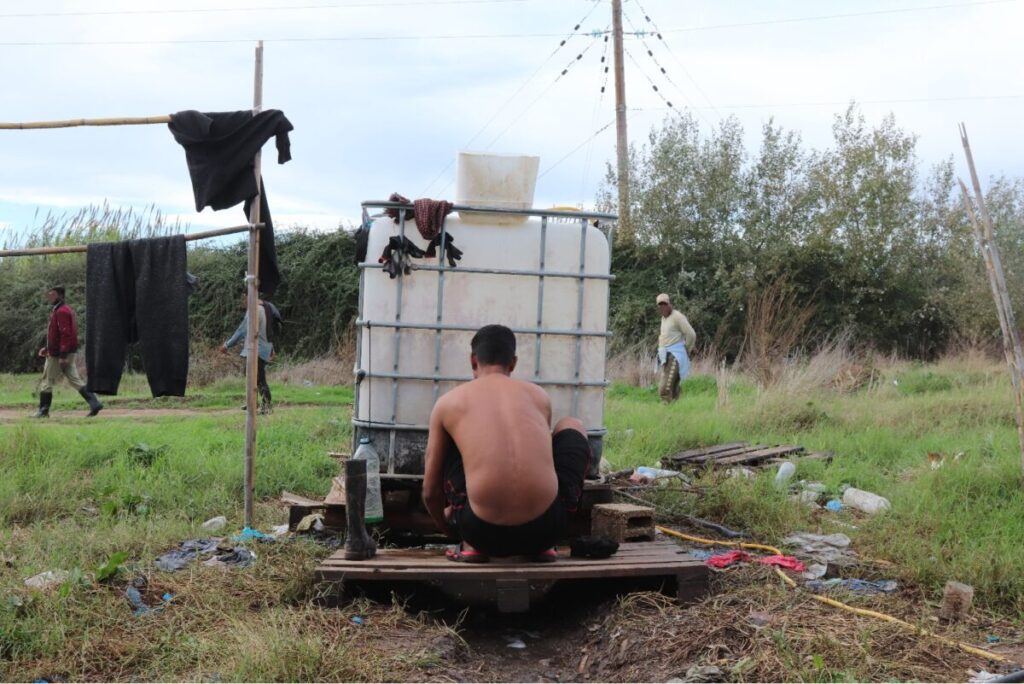 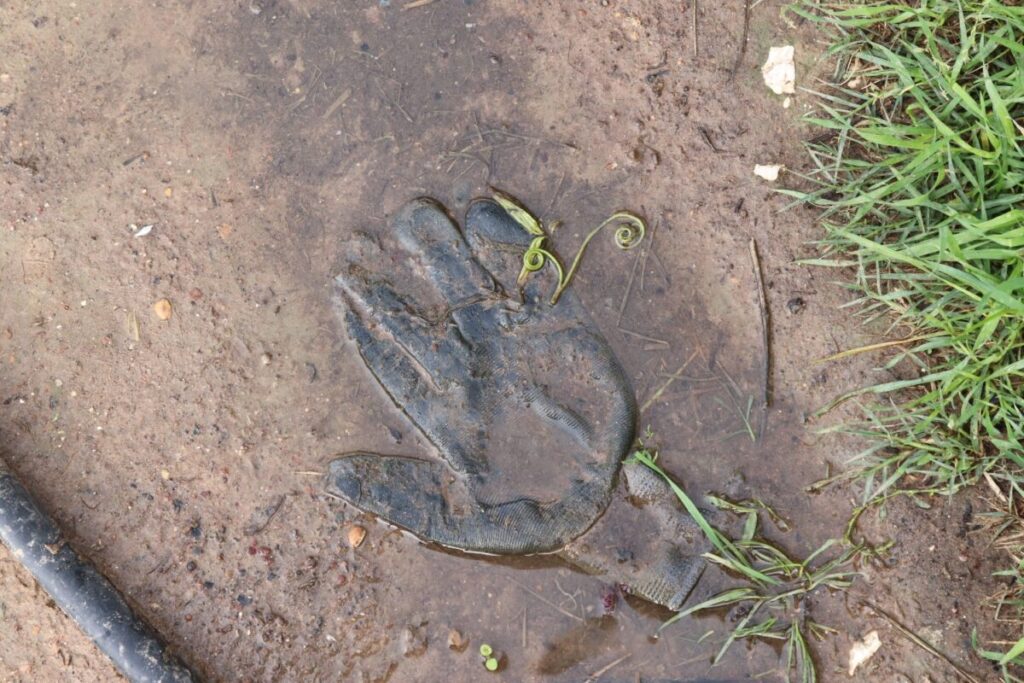 Images of the shacks surrounded  by mud and garbage, with no sanitation facilities ©Generation 2.0 RED

The visit was carried out with the support of

Here you can find the Report of September 2022