Report on the situation at Manolada | July 2020

Report on the situation at Manolada | July 2020

Manolada Watch is an initiative of Generation 2.0 for Rights, Equality & Diversity for the monitoring of working and living conditions of the migrant agricultural workers at Manolada in Ilia, Greece. Since 2017 as an organization, we have been dealing with the situation in the region, which has resulted in us having a lot of data and relevant experience. We decided to share the experience with the public in order to contribute to the awareness of the Greek society and the public authorities for the case of Manolada.

This report follows the visit of our organization in Manolada, on July 29, 2020. We looked in on the two camps that we are monitoring, in order to record what we witnessed there. We also talked to land workers so as to be informed about their living and working conditions as well as about other current issues.

Reminding that there are no official records about the exact population of land workers, the number which remains in Manolada during the summer months is quite reduced and ranges from 3,000 to 4,000 people, according to the estimates of the land workers. During this time, the majority of them has moved to other parts of the country and is engaged in other types of agricultural sector, given that the production and harvest of strawberries has been already completed.

Most of the land workers have no legal documents. As it has already been recorded in the report of June 2020, according to the police’s estimation, only 1/10 of them have received a certificate of “postponement of expulsion due to employment in the agricultural economy” (based on article 13A of Law 4251/2014), while 336 farm workers have a residence permit for humanitarian reasons due to the 2018 fire.

Moreover, according to information we received from the competent service of the Ministry of Immigration and Asylum, during July 100 more permits were ready to issue, while in the next period it is expected that the process will be completed for another 150 permits of the same type. Nevertheless, due to the long delay in the issuance of them, most of the permits for humanitarian reasons are issued as already expired or will expire soon. As a result, land workers are forced to proceed immediately with the renewal process.

The living conditions in the two camps we are monitoring remain difficult and dangerous for the health of the land workers.

In the first one, there are makeshift huts made of bamboo, steel and greenhouse plastic films. For their stay in them, the land workers pay a monthly fee of 15-20 euros per person.

Due to the extremely high temperatures during summer months, it is impossible for most of the people to stay in the shacks during the day, where the temperature multiplies because of the plastic and the lack of natural shade. Furthermore, there is no water supply, apart from some small plastic tanks, and for drinking water the land workers supply themselves with plastic bottles from the market. There is also no provision for sanitary protection, i.e. there is no waste collection and no sewage cleaning of the makeshift toilets inside the camp.

In the other camp, which was created after the 2018 fire, there are lodges, made of plywood, which have been inhabited in recent months. According to the land workers, in addition to the monthly fee of 220 euros per house (capacity 8 people), they also have to pay a fee for electricity through a generator, which amounts to 60-90 euros per month, for the entire camp.

Finally, we noticed that – apart from the lack of collection of waste from both camps – there are no garbage bins around the entrances to these areas, so that the land workers are able to throw their garbage there. As a result, a huge volume of plastic bottles and other waste is concentrated in the area of ​​the two camps.

Work on the strawberry fields has been completed since mid-June and will start again in mid-October to early November, when the new seeds and plants will be planted. According to the land workers who remain in Manolada at this time, most of their colleagues have moved to other villages in Greece where they work in other crops, such as tomatoes, potatoes, peppers, tobacco, etc. 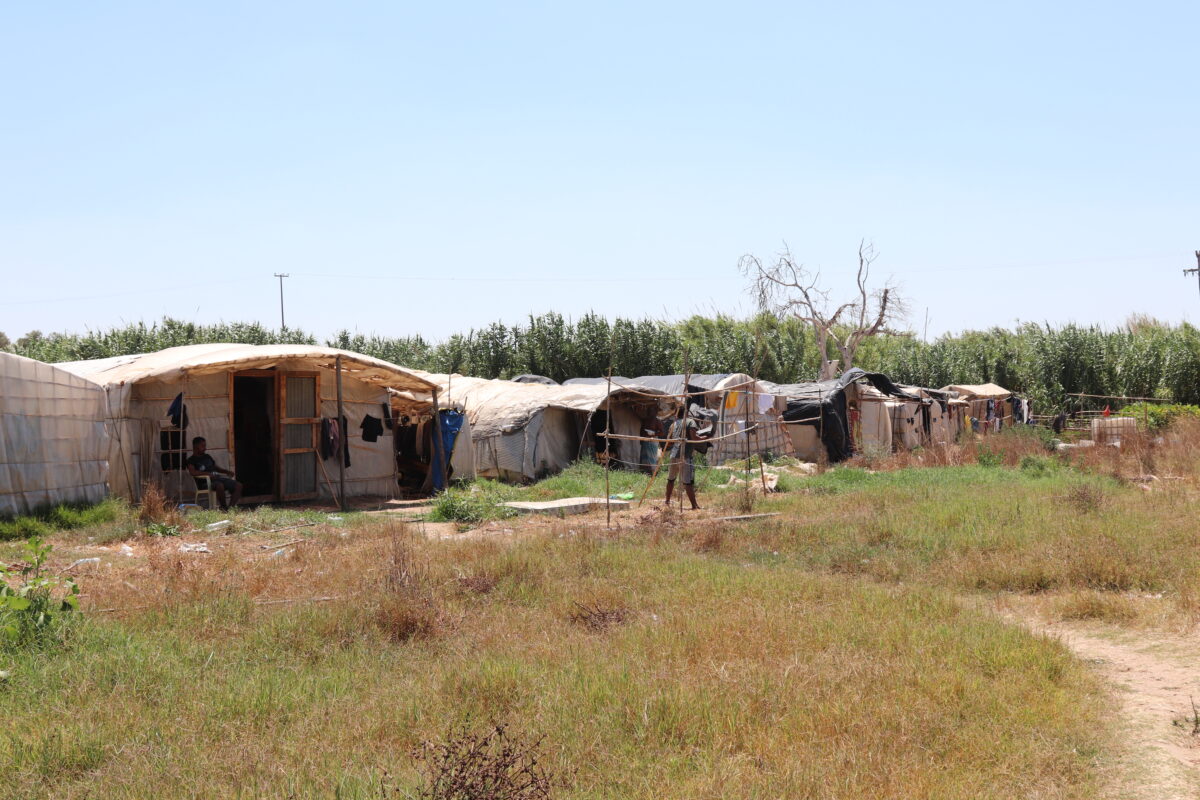 One of the camps in Manolada | Generation 2.0 RED 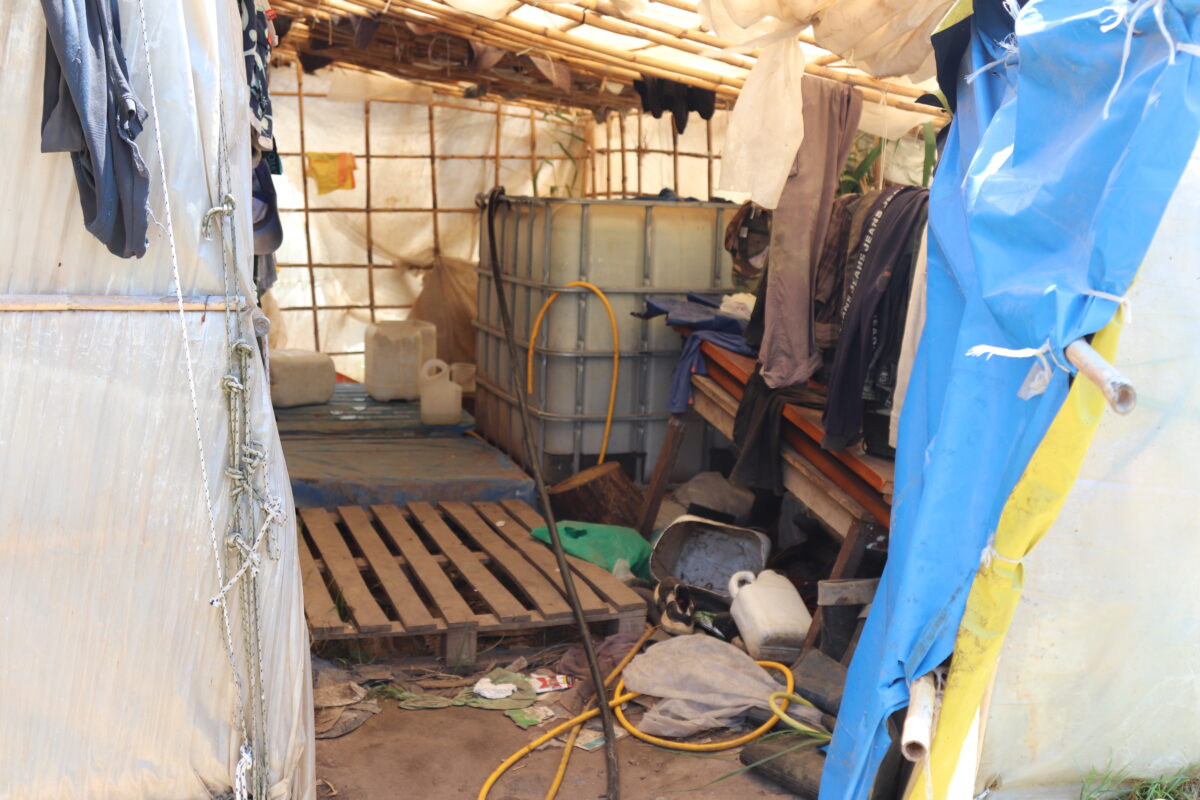 The interior of a hut | Generation 2.0 RED 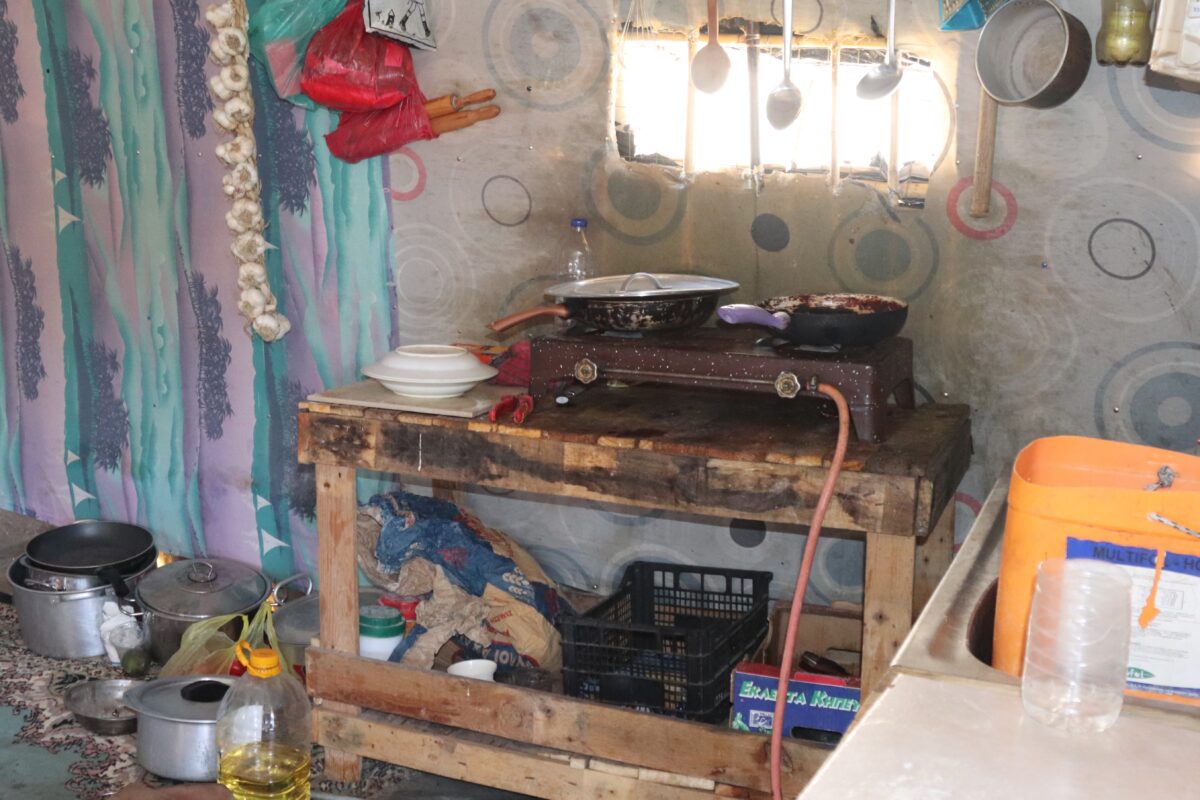 Makeshift kitchen in one of the huts | Generation 2.0 RED 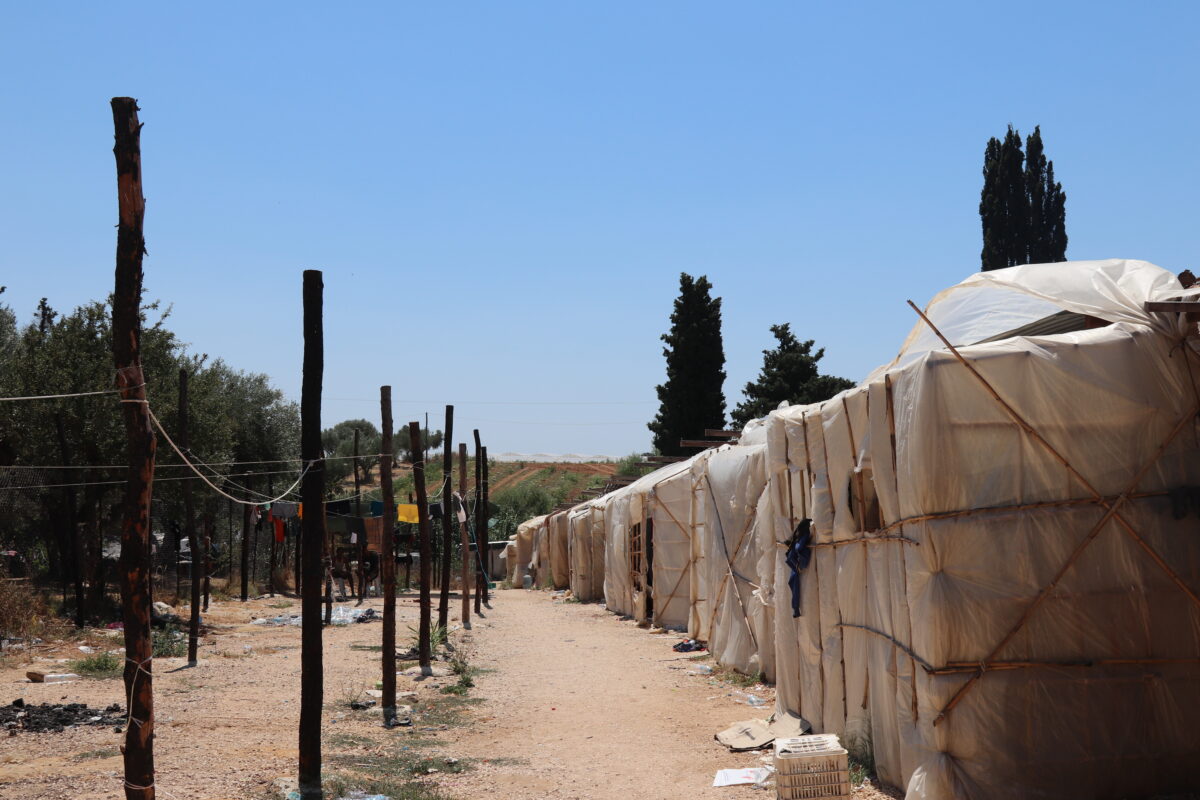 The camp which was created after the fire of 2018 | Generation 2.0 RED 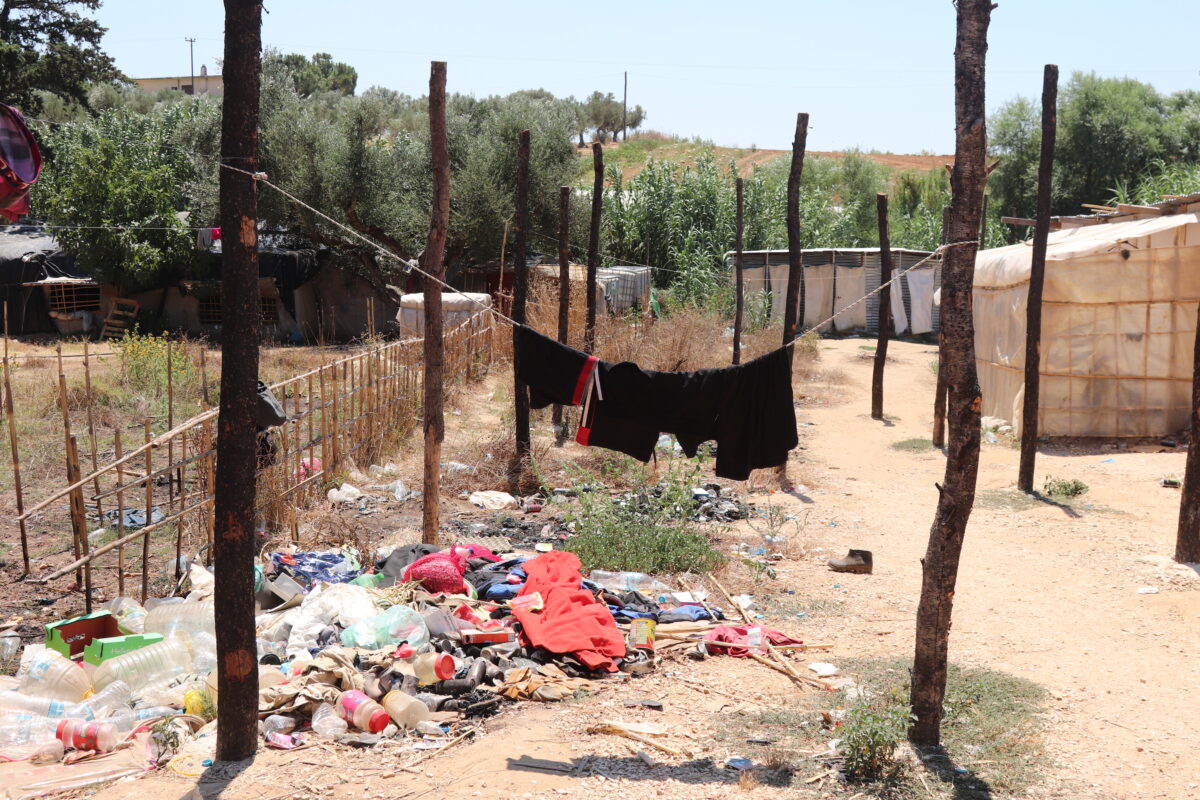 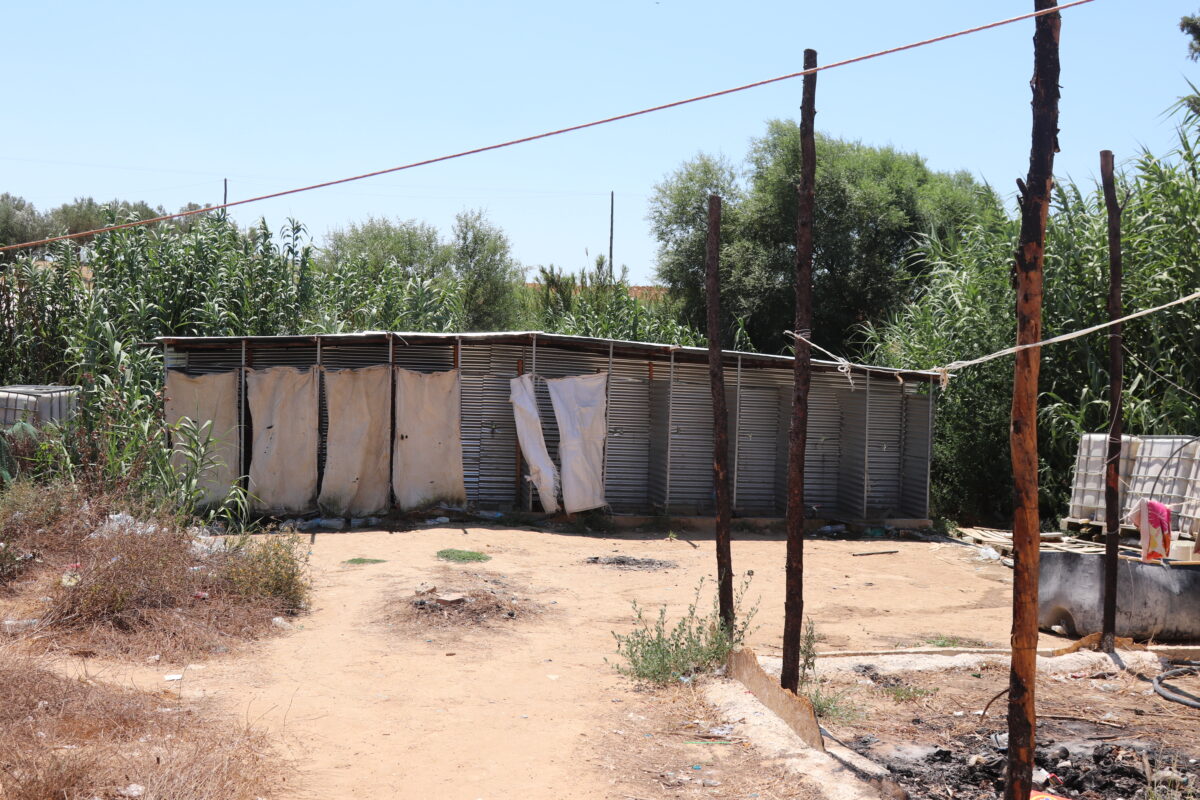 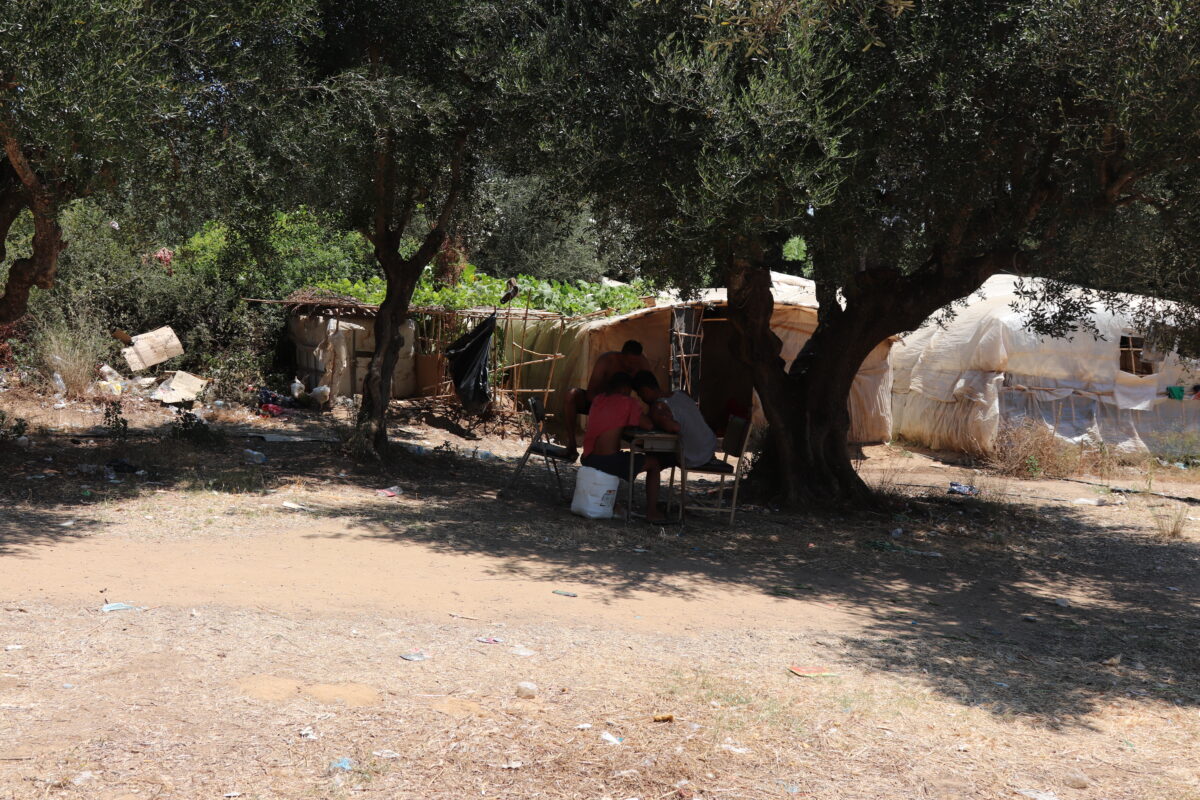 During the day the workers stay in the shade of the trees next to the camp due to the high temperatures | Generation 2.0 RED

Here you can find June’s report