HIDE & SEEK: The Pause | The teacher who didn’t study tells us: “Study!”

HIDE & SEEK: The Pause | The teacher who didn’t study tells us: “Study!” 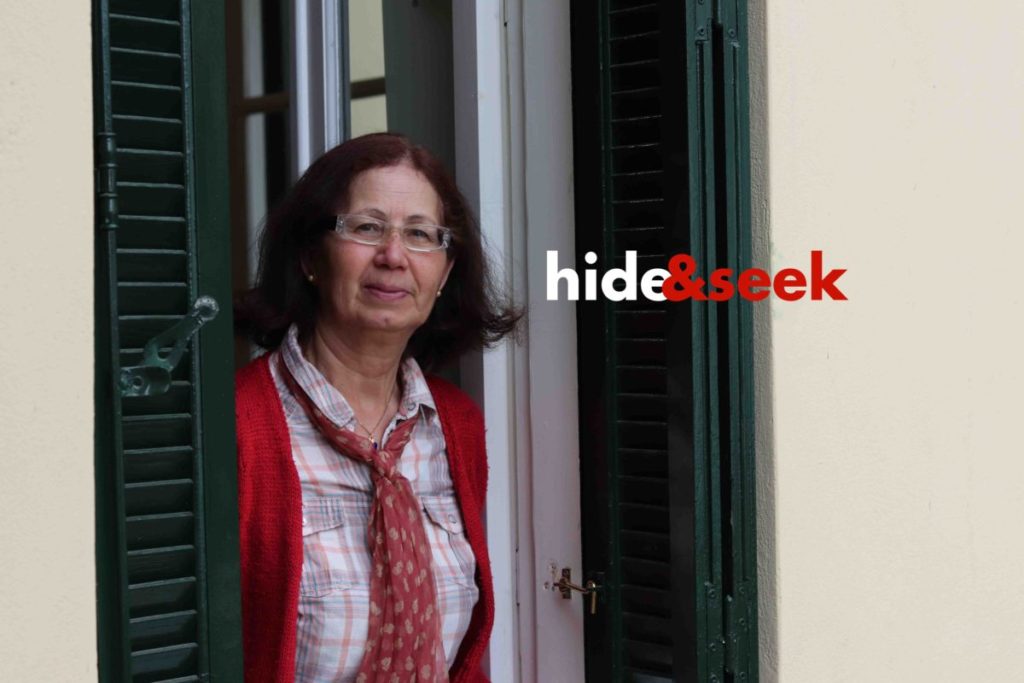 Absent-mindedly spinning the globe light in Lena’s office, I stare at the continents that pass quickly before my eyes. So similar and so different! I put my pointer to stop the orbit and I look to see the place I got. My finger stands on Libya. I look closer and find myself on Tripoli. Closer… and I am in some unknown neighborhood. I see trees and houses. A girl plays on the street. It’s Mrs. Zina, who I imagine then they simply called her Zina. I wonder what life she dreamt of?

Then she dreamt of simple things! …as she tells herself, years later, sitting at a desk of G2RED, in the center of Athens.

I dreamt of what all girls dream of. To become a teacher, to get married, and to have many children!

Everything she dreamt of slowly comes true! She finishes school to become a teacher. Then she gets married. She is having her first son. She has her house and her car. She says she has no financial problems. She lives a calm life. As calm as life can be in the dictatorial Libya of Gaddafi.

In 1981, in a country that is already boiling like a fiery cauldron, mobilization is happening. The men are being recruited in the streets and are being sent to the Lybian-Chad border to fight. To fight, why? For what? Everyone was fighting everyone in a neverending game of power and wealth.

Because we have oil. This is why they “love” us. But my husband did not want to fight without a reason.

They took their two year old son and headed for Greece. They traveled via Tunisia. After time-consuming controls, they arrived in Athens. First she went with her child, then her husband arrived. They applied for and received asylum. A different life began.

At first I did not work. I was at home. I had my second son, Elias. To learn Greek, I spoke with the neighbors in our apartment building. Over the years, they got to know me and I got to know them. They started calling me for work. I helped the elderly, I did babysitting. I raised Christina from when she was one year old until she went to the third grade! Afterwards I took care of Konstantinos.

And now? I ask her, trying to put together the pieces of her journey.

Now I am a teacher! I teach the third grade at the Lybian school in Psychiko.

I smiled conspiratively with the quests of fate. As a girl she wanted to be a teacher. She became one. Wars took place. She changed continents. She changed many professions. Then, the Arab Spring. As the dictatorship fell, she asked to be sent her degrees. She knocked on doors to find work. Today she is again a teacher. She is made for this!

I have children from different countries, she continued proudly. From Saudi Arabia, from Tunisia, from Syria and Lebanon. So far we speak Arabic, from the next class we will also learn Greek.

She smiles calmly, wisely, with her back straight and her head high. Like a teacher! A teacher in a school without desks and a blackboard. In a school that does not teach you writing and reading, but values, pride, perseverance, hard work, strength and faith. Like a teacher of life.

I am proud to have lived in Greece for forty years. That I managed far from my homeland, far from my family. I had three children, and I am proud of their character. I brought them to a country where they can make their dreams a reality. We taught them what we knew, we sent them to school, they speak three languages. Now they are going to do what they’ve dreamt of. All we want is for them to become the best children in the world!

The cosmic power of all mothers who bravely gave their blood for the free future of their children shone in her eyes. Of all the women who passionately offered their children the opportunity to dream, with the wish to become the best children in the world!

Almost forty years after her first entrance into Greece, we discuss how her first interview went for her process of naturalization. The process that would unite her Lybian background with her Greek life.

Whatever they asked me, I answered everything. Everyone tells me I will pass. If Ι don’t see the ruling, I’m not saying anything! A few years ago they rejected my husband, without ever telling us the reason.

I ask her what will change when her Greek ID will be alongside her Libyan ID.

I will travel freely, without fear. I will go to Libya, which until now was forbidden. I will have the citizenship of my children, who were born here. I will travel!

Where, until now, have you traveled? I ask since we share the same travel passion.

France, where I went on walks with my youngest daughter. Barcelona, where I reached by car.

For some reason that I never understood, I asked her if she is a bit afraid of planes.

I wondered if we were still talking about planes.

We are talking about essence!

The power of her ambiguous reason illuminated each dark corner of my mind. Expectations, fears, unpredictable pains and weaknesses, everything slipped. Serotonin and dopamine happily fired at my neurons.

My advice to those who are starting the process: Study!

Study early on! My mistake was that I worked and I didn’t take lessons. My children were studying at a Greek school, and I could have followed, but I was lazy. As the notice came for the interview, I freaked, it was in one month.
I began to study in a panic. I asked what words meant that I had just asked about. My daughter complained: Mom I just told you what it means! I then understood my students in class who, full of wonder, would ask me to repeat something I had just said.
Study early on!

I believe most people recognize the few days before the Panhellenic exams, where you wholeheartedly believe you will learn of a year’s material to pass with excellence to get your first choice. Years later you thank your luck that you didn’t actually pass into the choice you declared. But before I get lost in the horrors of the Panhellenic exams, I return to now. I ask Mrs. Zina if she wants to add something, something we forgot.

Peace and love to the world! To Libya, to Syria, and to you in Ukraine!

Brecht would have added. I am silent. I started to hear the lesson I just received in my chest:
Study early on! Go higher!
If you ask me what exactly we are talking about, I would say:
Essence!