HIDE & SEEK: “Ι don’t have a hundred rumbles, but I have one hundred friends”

HIDE & SEEK: “Ι don’t have a hundred rumbles, but I have one hundred friends” 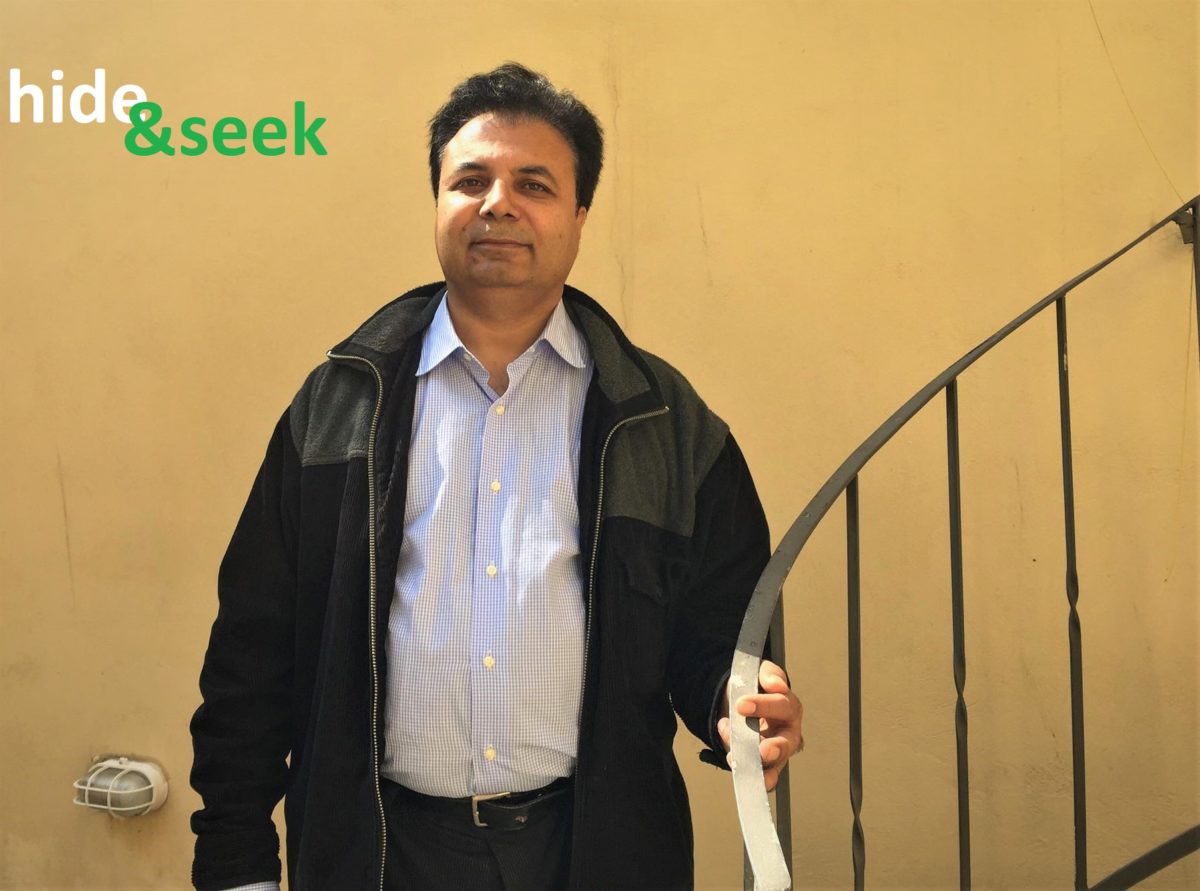 The path of a refugee towards naturalization is like a poorly maintained rodeo at a luna park, that runs in a big avenue with 200 km/h, on a holiday. For some people, this road is one way, for others pedestrian, for some other motorway, and for others there is not even a road, they create it themselves. Sometimes with their own life. In this case, Dr. Safiq’s road reminds a James Bond movie in a trembling Trier filmmaking.

He was born and raised among eight siblings in the Kalas valley, in northern Pakistan. In a religious, rich family of teachers.

“My mother made me a dessert in the morning and I went to school. I remember sharing the food with my classmates and I was returning home hungry. Since then I could not understand, why some people own, while others not. ”

The answer to the question “why” came from his cousin’s religious books, while he was growing up: “People are either poor or rich. The End! After death, everything will be set“. He also read in these books: how your wife is conformed, how the Islamic state should work, what people should wear during summer and many more. Little Safiq was not convinced.

Some years later in Peshawar, at the university, he would get different answers. Answers that would come from the books of a fellow student. And years later, he would call him Mentor. In Gorgi’s and Dostoevsky’s books, Marx and Engels were shouting “We are all equal“. The teenager Safiq was more convinced.

“My world turned 360 degrees around. I realized that if there is a God, he would look like Lenin and will support equality and the «we»“.

In 1986 the war in Afghanistan began, and refugees were sent to the border states.

“My mother used to cook and then we were bringing food to the camp. To the people“.

The state propaganda was sobbing from every crack. “Unfaithful Russians, communists, pollute our religion and corrupt our youth.” The support of young people at the university was evident to the rebels who fought the state. Demonstrations supported the struggle. I think it takes nothing more to be considered “dangerous” for the Islam. The solution to the problem was to gradually destroy the progressive minds. Those that have destroy the «recipe» over the centuries.

“To protect ourselves, we crossed the border and went to Kabul. We were young and restless. We wanted to change the world. Make it better. ”

It was summer and about twenty people made patrols in the city, when they heard the Mujaheddins’ rackets coming over them. The world was rocked and shattered with a swarm in the abyss. When Dr. Safiq «emerged», he was in Moscow, Russia. “Congratulations, you’re alive,” the doctor’s voice welcomed him back. What happened to others, he did not know and never learnt.

“In the place I grew up there were no doctors. Only charlatans asking for money to cleanse you from sins.”

Staying in Russia was a one-way road. The conviction was waiting for him, if he went back. In front of him were the medical studies. He chose the second way. He went to Zaporozhye, learned Russian and started. Besides, he always wanted to be an orthopedic surgeon.

“In the place I grew up there were no doctors. Only charlatans asking for money to cleanse you from sins.”

Sin, in fact, was the common diagnosis for all diseases, from fractures to colitis. And the only remedy was repentance, with a price of course.

When he completed his studies, the Soviet Union «crackled on the seams» and, by taking an amnesty, returned to Pakistan, taking the Afghan passport at the same time. Dr. Safiq had changed a lot and what he would meet back in his country, exceeded the limits of his sanity by far.

In the local hospital, there was no orthopedic doctor for the twenty-five million inhabitants of the area. Therefore, the Shamans continued their work with gangrene and amputations to be a natural consequence. In interviews to find a job, they would ask him to interpret verses from the scriptures and not if he knows how to operate. In the Mosque, each movement will be controlled. “Sorry we do not have vodka to give you, would you like water?” Someone else will mock him. As the mullah shouted, the doctors dipped as the elbow into the blood gave them everything and went to the mosque.

– Doctor, why aren’t you going? Asked someone who was dying in his hands.

– For you to stay alive. Dr. Safiq replied.

– Only Allah will help me and until the prayer is over, I don’t want to see you here, leave me.

Dr. Safiq continued to describe the first aid section as a nightmare. I would define as a nightmare, the fog in the people’s heads. A nightmare that will never let them live free, staying eternally imprisoned in their own mind.

There might was no health but there was “education”. The five hundred religious schools had become eighty-five thousand. On the one hand, regular schools taught how H2 combined with O and with Allah’s help would become water and adding 2 + 2 with Allah’s help would become 4. On the other hand, the Jihadists were preparing the children for the Holy War, giving 300,000 rum to their families. This amount of money was not much but not few either, and the final bill would be paid off in paradise “since you were going there, it’s a shame to go alone, take some other people with you.”

“A mind is like a parachute. It doesn’t work if it is not open”. Frank Zappa said, and Dr Safiq decided to put it into practice.

“I did four jobs, but that’s how I could afford to send the local children to a regular school. Boys and girls. So that they can once think of themselves as scientists, away from the spiritual prison of Allah. Together with progressive minds from all over Pakistan, we made an educational program to get our country out of the spiritual deadlock“.

The Jihadist schools began to lose students and the “business” was threatened. Research began. The atheists had to get out of the way.

“They brought me into a war zone region to get me out of the way as a victim of squabbles. I went to another area. A summer afternoon, against the Sharia (sixth century law) banning shorts, I was sitting on the porch wearing shorts (in the 21st century), and I felt a mosquito stinging me. Bending down to make it go away, bullets left the forest in front of me and ended up on the wall behind me. I listened to the empty shotgun shells falling on the floor. A mosquito had just saved me!”

Dr Safiq was in Greece for a congress when two hundred people came in with the religious order. The radio announced the names of those to be executed the next day. Among the names in the list he heard his own. But he was away. They burned his house and arrested his family. They were tortured and questioned. They were released, provided that they would hand him over to the Taliban.

Public executions continued. Bodies were hanging upside down in the square as a warning. Whoever went against the Sacred Law would have the same ending.

“Every progressive person was executed. Everyone had children. They were working and cutting off from their families to do something good for this world. They were saints, real saints. I owe them what I am. They paid it so hard. Once someone should write about them, in order to attribute justice.”

We were silent, crying together. We were crying for the eternally unanswered question “Why? Why people towards people?” The dusty centuries will pass, everything will be forgotten and start again, in an eternal battle of life and death.

Dr. Safiq stayed in Greece and asked the country to protect him with asylum. At Petrou Ralli avenue and with the help of an interpreter, he gave his first interview. The interpreter translated the questions in row. “Religion?” Asked him at some point. “Atheist“, Dr Safiq replied, and from that moment on, something changed. Dr Safiq will never know what the interpreter was translating and if he played its part, in the rejection decision he took. Two years later he was interviewed again in English because he wanted to talk to the committee himself. He got asylum.

“Now I’m working at a Second World War veterans’ institute in Brahmami, I have a room and I live there. I was member of the Doctors of the World and I went to the Athens Clinic to be close to my field of expertise. All in a voluntary basis, because my degrees cannot be recognized and I cannot work as an orthopedic surgeon.”

He is talking about DOATAP’s negative rating. He participates in actions for refugees. He shows me articles that he has written in Urdu, in Finnish, in Persian, in Russian. He speaks seven languages. He wants to offer, but he feels trapped in bureaucracy.

“I could help as a counselor. We fought Islam, you are fighting Fascism. Things could be done more organized, more stable, for the world, for children.”

Dr. Safiq’s wife is also a doctor. She travels to England, teaches, volunteers, but she does not work because she waits for the recognition of her degrees. Excitement, anger and frustration overwhelm two outstanding scientists, their hopes wedged as though they were between thick folders stacked on a desk floor.

“I will stay here, I will fight it here. I applied for naturalization. I did the interview. I am anxious about the outcome.”

The first question they asked him at the naturalization interview was “Who said the famous phrase, ‘it’s better to live one hour of free life?” “Rigas Fereos” he replied, and the commissioner shrieked. “Then tell us, what does the fox do at the bargain? (it’s a Greek song)” and Dr Safiq shrieked this time.

“As difficult as it may be, I am happy with the place that hosts me and when the formal procedures are over, I can offer myself back. My home is always open and full of friends. Friends I met in Russian wagons, in hospitals in Pakistan, here in Greece. I am proud of what I have done, and I do not regret the slightest. I only look ahead.”

Heaven and hell are more like the luggage you carry with you than your destination. Dr Safiq carries luggage with wisdom. Wisdom that mixes your inner cauldron. For some people this becomes a lighthouse for some others a deadly enemy. Besides, mankind all over the earth is ready to release Barabbas, in order not to face the truth. So, in the history of Dr. Safiq gods and demons, in all shapes and colors, are fighting for sovereignty. Somewhere there, Dr. Safiq stands and says fluently in Russian: I do not have a hundred rubles, but I have a hundred friends.