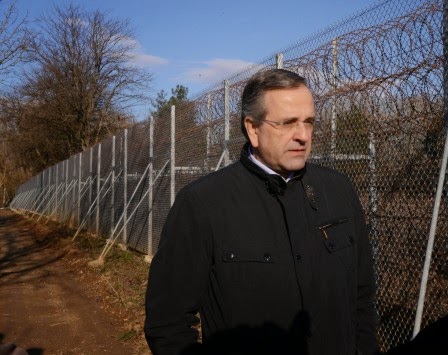 Following the fear-mongering statements by the Prime Minister Antonis Samaras in his pre-election speeches in Evros (05/01/2015) and Chalkida (07/01/2015) against “smuggled migrants” and granting Greek citizenship, we have discovered that:

Mr. Samaras claims that granting citizenship may lead to similar attacks. The Prime Minister talks continuously about (not) granting citizenship to immigrants who have just arrived in the country. For Mr. Samaras’ information, none of these refugees ever asked for citizenship. The people who are claiming their right to citizenship are children of migrant origin who were born or raised in Greece. People like Giannis Antetokounmpo, with whom he had no problem being photographed at the Presidential Palace, where Samaras “declared” him Greek – something that Giannis had become long ago through his Greek education, not through becoming an NBA player. In particular, we wonder about Mr. Samaras’ contradictions, since last month a Minister from his government signed a bill for access to Greek citizenship for young people of migrant origin.

The Prime Minister’s aim should be social cohesion, but all that Mr. Samaras has been doing in the past few days is cultivating fear, intolerance, fear-mongering and racism.

As for the unacceptable and atrocious choice of the Prime Minister Antonis Samaras to use to his advantage the death of 12 French citizens, 12 of our fellow European citizens, we believe that he has already received the fitting and appropriate response from the French media.

It is historically proven Mr. Samaras, that fanaticism always comes back as a boomerang.