From the 14th of February, Ghouta is being mercilessly pounded by aerial attacks against the remaining dissidents’ forces in the city. The Asad government claimed that no civilian population is targeted or threatened, but the data are shocking: According to the Syrian Human Rights Watch, more than 800 civilians have been killed by the violent bombings launched at the guerrilla bastion. Among them, there are 175 children. What comes as news to our ears from activists operating in the area is the humanity in us that slowly dies: “Those who are killed are people. Not numbers.”

The United Nations’ High Commissioner for Human Rights Zeid Ra’ad al-Hussein, in view of the terrible developments in the city of Ghouta, addressed the attacks as a “monstrous expulsion campaign” against the anti-regime forces and the 400,000 people who remain in the city. UN Secretary-General Antonio Guterres spoke about “hell on earth”, while calling for the immediate cessation of hostilities, while the French government condemns all the attacks being unfolded. However, the five-hour (!) daily truce for humanitarian aid, declared on February 26, has never been adhered to. Airborne bombings and land raids continued, while there was a pillage of humanitarian caravans from Assad’s soldiers, who took a large amount of medication intended for the people of Ghuta. 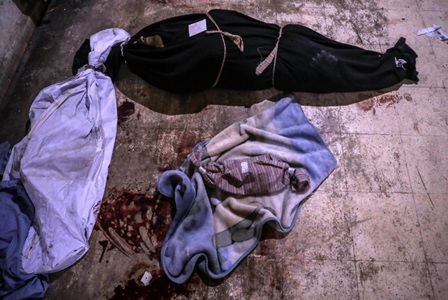 If this picture does not shock us, does not infuriate us and does not hurt us deeply, we should redefine immediately the term “humanity”. Because there is nothing “humane” in the pictures travelling around the world. And because this picture cannot hold all the world’s sorrow and pain.

Returning to our own reality, in Greece of 2018, far from the reality of Ghuta, the refugee issue, caused by warfares all over the world, for some unexplained reason has faded away. As if it ended magically after the EU-Turkey deal. It is not mentioned anywhere in the news panels except of some tragic events in Libya or Italy.

And here I pause. How can we believe that refugees have stopped entering the country while wars are ongoing? How can we believe what we hear in the 20:00 news panels? Because, according to the International Migration Organization, 29,595 people arrived in Greece in 2017, while 3,166 people drowned in their attempt to reach Europe last year. And it is not mentioned anywhere, compared to 2015 and 2016, when these numbers were repeated, again and again in the channels, in panels, with tearful monologues of the TV presenters. Now what? Nothing.

And again, back to our Greek everyday reality: About 5,500 people still remain in the Greek islands, in a legal limbo, not knowing when and where they are going to be moved, when they will be able to rebuild the life they lost, without this being their own will or responsibility, but someone’s else. Meanwhile, the various reports about the situation inside the camps in Greece can only cause shame. See report g2red.

The issues raised here are two: 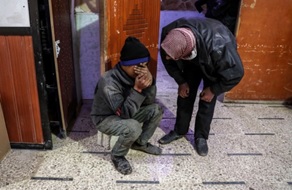