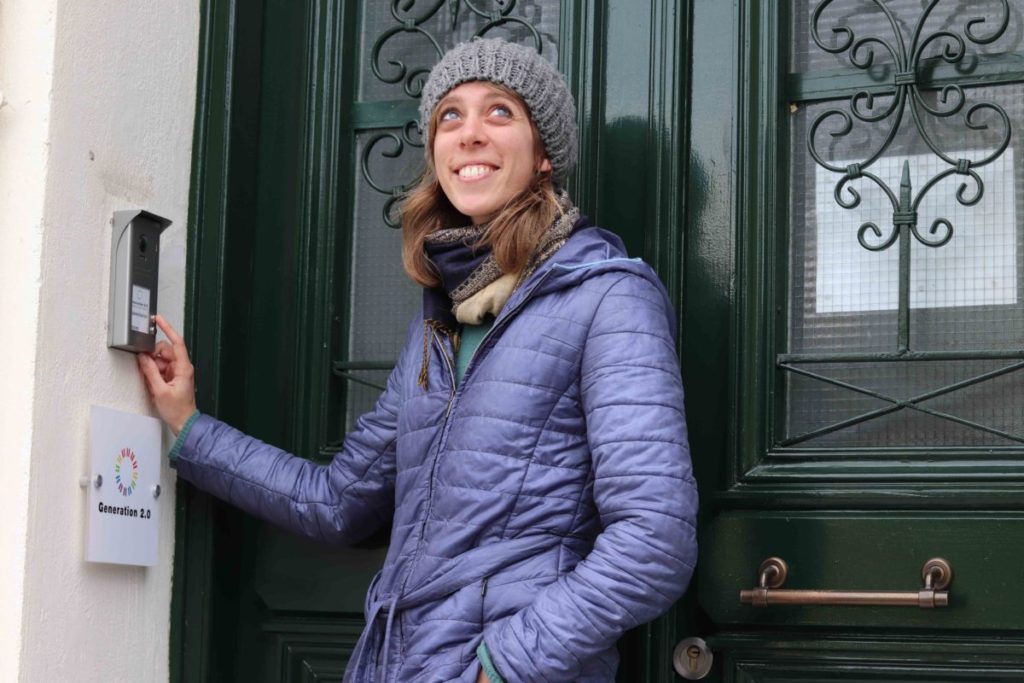 When you live in another country and you don’t understand what’s going on.
An article by Silvia Giulini

I was outside ROMANTSO, waiting for my supervisor. She told me to come at 10:00 but she was not there, yet. In front of me there was a bar, a door and a weird door phone without names, only numbers. The place was amazing.

There, a new adventure -much longer than what I was expecting- was about to start.

I was excited and shy at the same time. So shy that I didn’t dare to enter or ask for information at the bar. Not even to order an orange juice. I just stayed there, in front of the door, pretending to look at my phone, until my supervisor arrived.

When I entered the office -a very small and crowded one- I met the other members of the organization. They were few and smiling. But I was so embarrassed: I had forgotten how to speak English and it was difficult for me to communicate. The majority of the people there were speaking Greek and I could not even keep one word in my mind.

The first thing I was asked to do was to put data on an Excel file and so I did. I was not particularly excited about it, but I was sure -and time proved me right- that this was just because it was my very beginning.

After hours spent putting data on a very slow laptop, I started to be a little bit hungry. But nobody was about to eat, so I decided to stay silent and wait. At 15:30 I was starving. But still, nobody was eating. Do Greek people even eat?! Cause one is working, one is smoking outside, and nobody is eating! What’s wrong with these Greeks?

The time was 16:30, and still nothing. Without any hope, and very shy, I decided to go to my supervisor and ask her, in Italian so that nobody else could understand, “Sorry for the question but… in Greece don’t you eat for lunch?”.

That day I also learnt the existence of the Skype Facilitation: a group of Albanians were sitting in the middle of the office waiting in front of a laptop. I was asked to help in the procedure. I didn’t understand what it was, but soon, while I was to become responsible for it, I had to. I remember the tension I had while, from the other side of the screen, they answered and started to speak Greek… only random sounds to me!

While time was passing οn my first day in the office, more and more mysteries showed up for me to solve. I learnt the word “parakalo”, because everybody was saying it when answering the phone. But there was a thing that never stopped surprising me so much: in my eyes, all the Greeks were agreeing to each other! They were shaking their heads up and then down, while they were saying “oxi”. Because of the movement of the heads, I thought that “oxi” meant “ok” and I was amazed from this people: they were agreeing even while they were shouting!

I had to learn a lot of things and Ι still do. Culture, attitude, behaviour. Living in another country is not easy, not even for a European citizen -as I am-  that moves to another European country: there are so many behaviours that I misunderstood for long time and maybe even now!

Sometimes I felt frustrated by someone’s behavior and in some cases I couldn’t understand the attitude of others. But different countries have different cultures. And what seems okay in one might be offensive in the other. It takes time to understand those differences and even now, after two years in Greece, there is a long way ahead of me, because integration is an ongoing process.

How many times I heard my name, unable to understand what was being said about me before and after it! Was I doing something wrong, or right? Did they like me or didn’t they?

It makes me laugh today to think about that first day in Generation 2.0 RED. I am outside our new building, in Koumoundourou Square. There is no longer that very shy, young woman who is starting a new adventure in a foreign country. There is a woman that has learnt a lot and, in spite of that, she still learns.

In front of me now, in the doorbell, there are no confusing numbers, but only capital and clear letters.