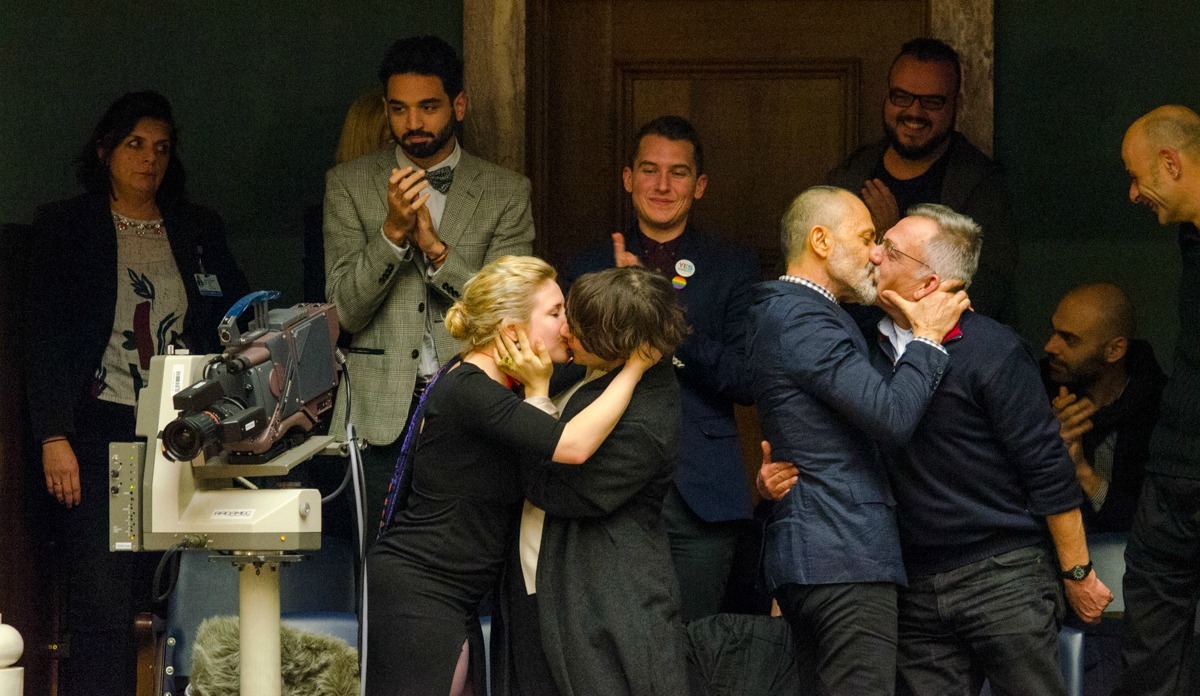 An article by Vassilis Gerasopoulos, a Criminology postgraduate student in Utrecht

From the moment the civil partnership was voted, I am experiencing – in lack of a more fitting term– internal conflict. A voice in my head (the most realistic – or, perhaps, the most pessimistic) tells me that there is no reason for celebrating a legislation that has been unreasonably delayed and which, when it finally came, came with “discounts”. The second voice in my head (the most childish) is already fantasizing about a moment in the future that it will be dancing by cheering on the ruins of heteronormativity.

Let me start with the second one. A few months ago, the National Radio and Television Council (ΕΣΡ) imposed a fine of 20,000 euros to ΣΚΑΪ TV channel which dared screening a documentary on gay porn, with the argument that – more or less – the “innocent kids” of Greece and the “traditional lads” of our country may see the documentary as an invitation to promiscuity and sin (even while I am writing these lines, it is hard for me to perceive the nonsense – I am trying to be polite – stemming from some people’s heads). Last summer, Metropolitan Anthimos was asking from citizens to vigil against Gay Pride in Thessaloniki (to end up encouraging, unblushingly, believers to lynch LGBTQ people only a few days before the legislation of civil partnership was voted). That sad reality reveals the moral panic of all conservatism supporters – and there are plenty of dishonest people in Greek society. The theory of moral panic attributes, to put it simply, this disproportionately aggressive attitude of Church and State representatives to the emotion of fear. Of a deeper fear that agonizes the moralists, the “traditionals”, the conservatives. Because the civil partnership is a sign of the movement of Greek society – even by dragging itself out of breath – towards an era where there will be more than one appropriate alternative to how people choose to live their life, with whom they share it without giving an account for that, without being victimized, isolated and living unhappily. The deeply rooted constitutions – either we are talking for the church or for the concept of the holy respectable Greek family – are scared to death when thinking that the myth of heteronormativity is endangered since the myth’s collapse will signify a new era, where someone’s social existence won’t be oppressed by the unavoidable path of norms, imposing that life and happiness are achieved only through one way – “finding a nice guy, with a good job and becoming a housewife and a mother before you are too old”, if you are a girl, and “finding a serious, reserved woman and have children”, if you are a boy. These explicit and implicit commands have been so nuclear to the construction of collective consciousness, that any possible fall of them equals to a megaton bomb. After all, how is the Archdiocese going to cover the expenses if the faggots start getting married at the City Hall and the atheists lesbians refuse baptizing their children? God forbid…

On the other hand, the law leaves unregulated or doesn’t dare touching issues more essential and meaningful. There is also no reason for celebrations since the Greek State has done nothing more than complying to ΕΔΔΑ (European Court of Human Rights) convictions, that has decided on that before two years. In addition, as a friend has noticed, what’s the meaning of it that if the stake of all that story is, hardly, a civil partnership. The right to adoption and to family –of a special importance– still belong to the world of science fiction. Moreover, we should be concerned with the fact that fundamental rights issues fall to someone’s discretion either through a direct democracy tool (as it happened with Ireland’s referendum) either through a legislation voting by the admittedly discrepant and unreliable Greek Parliament.

The two voices in my head have not concluded yet in some kind of partnership but one of them – the one who is fantasizing delighted all the scared narrow minded people having a number of heart attacks – characterized by a charming optimism, wins on points. I maybe be naïve but I cannot forget my Irish friend who was hugging me last May and telling me with emotion how proud she is that whole families rushed to vote for same sex marriage. “At least now, we can all be miserable in marriage!” And if the price to pay is a normalization of the gay identity, let it be at least institutionally safeguarded.