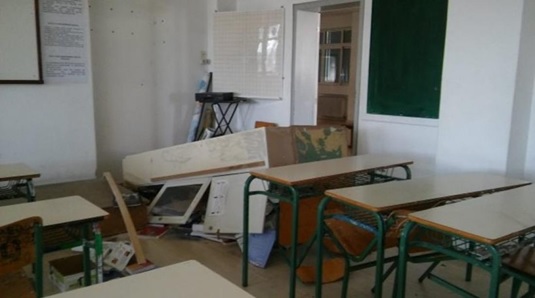 The news of the recent attack carried out by strangers, at the 1st Gymnasium of Eleftherios Venizelos in Chania, where the Albanian language is taught to the children of migrants raises serious concerns. Even though no one has officially taken responsibility, the attack at this particular school is no coincidence. As is well known, this is not the first time this particular school is targeted.

Certain groups of people have continuously tried to stop the classes taking place, either questioning the legitimacy of the classes or using violent means. Driven by racist motives, this groups look for any excuse to deprive the children of their right to maintain contact with the language and culture of their parents.

The response so far, from the City Council of Chania as well as from students, has been encouraging and supportive of this initiative. This recent attack however, along with the attacks in other areas with similar initiatives, indicates that certain factions of society have decided to take drastic measures against it. The case of the Sunday School of the Pakistani Community in Athens serves as a reminder.

As an organization founded by people of migrant origin, Generation 2.0 RED stands in solidarity with the Albanian Community of Chania and all other migrant communities that – along with their integration into Greek society – struggle to maintain contact with their heritage and culture.

We strongly condemn such attacks and call on the local community as well as the authorities involved to not succumb to bigotry and violence, but to work towards actively isolating such voices. Let us not forget that Greeks, all over the world, claim the exact same right for their children.